If you’re in the market for a 2+2 cabriolet, the German Triad is more than happy to sell one. The 2021 model year BMW 4 Series Convertible stands out as the newest entry in the segment, and there’s a lot of good and bad stuff to take in before putting a deposit down on the open-topped car.
53 photos

Roman Mica of The Fast Lane is currently testing a 430i Convertible, and he singles out the shift lever as much better than a rotary dial or push-button controls. The seatbelt extender for the front occupants is a nice touch as well because you’re handed the belt automatically whenever you get in the car.

The M-badged steering wheel features a comfy, thick rim, and both front occupants can get even comfier thanks to extendable thigh supports. Another thumbs up goes to the rear-end styling of the vehicle, which blends curvaceous elements with sharp lines, vents, and an aerodynamic diffuser.

As for the bad parts, well, the Z-fold soft top with three fixed segments takes quite a bit of space in the cargo area. The opening and closing process leaves much to be desired as well according to Roman, who thinks that 18 seconds at up to 31 miles per hour (50 kilometers per hour) is too long. The Mazda MX-5 RF that features a hard-topped retractable fastback, for comparison, takes in the ballpark of 13 seconds. Typical of a 2+2 layout, the rear seats can only be described as “hell no” in terms of legroom and seatback angle.

The most offending annoyance is the buck-toothed grille of the 4 Series, which doesn’t even need that much air because the range-topping M4 takes its mojo from a six-cylinder lump with 3.0 liters of displacement. The 430i Convertible is all the more ridiculous with the oversized kidneys because the engine bay is home to a four-cylinder mill with 255 horsepower on tap.

Priced from $53,100 excluding freight in the United States, the as-tested price of the press car in the following review is higher than a mid-engined Corvette, a V8-engined Mustang, the fabulous MX-5 Miata, as well as the Z4 with the same motor. More to the point, would you pay $67,220 for a convertible that will depreciate more than 50 percent in a few short years? 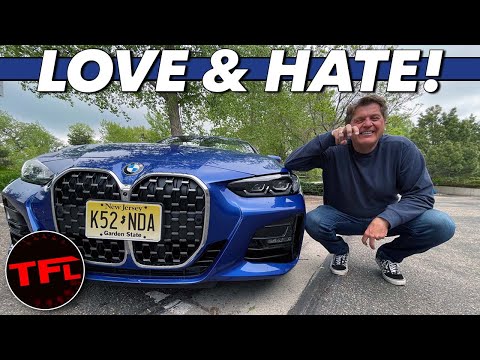