5 2017 Volkswagen e-Golf and Golf GTE Stand Side by Side to Be Compared
Car video reviews:
Coverstory

Every hot hatch fan in America knows about the Golf GTI, which for over a decade has offered a blend of 2.0 with turbo boost and everyday usability. But few are aware of the sexy sister called the Cupra Leon, which is actually available in Mexico.
4 photos

This is the all-new model, which hasn't been made available in Mexico yet and is only now beginning its conquest of the European market. Since this is the 2021 model year we're talking about, it inevitably needs some hybrid technology.

In the past couple of years, Cupra has become an independent brand, separate from Leon. It will also offer electric cars which are based on the MEB platform, just like the VW ID.4, and the Cupra Leon is now a large family of cars. You can have it with the exact same engine as the Golf GTI, a 2.0 TSI making 242 hp (245 PS), or the one from the Golf R with closer to 300 ponies. A wagon is available, as is this plug-in hybrid.

That's right, a hot hatch we actually think looks really cool, perhaps even better than the GTI. Copper accents, carbon-look trim and grey paint set this apart from its competitors. And the aero wheels specific to this plug-in configuration are also quite special. Check out that racing steering wheel with mode selectors!

As far as the powertrain is concerned, the hybrid Cupra uses the familiar combination of a 148 horsepower 1.4 TSI turbo engine and an electric motor to deliver the same 242 hp as Golf GTE, while torque is slightly higher than a GTI. The only gearbox you can have is a 6-speed DSG.

German YouTuber Automann-TV recently got to drive the car and subjected it to his usual acceleration tests. The Cupra was able to hit 100 km/h (62 mph) in only 6.5 seconds, so the extra weight of the battery really isn't holding it back that much. However, reaching 200 km/h (124 mph) takes 25.3 seconds, which we believe is slower than any Cupra made after 2013. 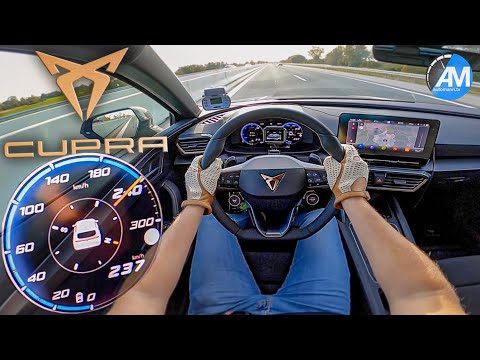