The first compact SUV produced by Seat was released in 2016.

Part of the VW Group, the Seat Ateca was based on the Tiguan and resembled much of its silhouette.

Compared to the Tiguan, the Ateca seemed to offer much more emotion and a more attractive exterior design, with LED front and rear lights.

A real head turned, the Ateca was available with both a front-wheel-drive or a 4-wheel-drive system.

The cabin was welcoming, with high quality finishes all around. The controls were easy to action and intuitively placed.

Small storage spaces were available all throughout the cabin, with a decent sized glovebox, enough space for a bottle of water in the door panels and another compartment under the driver’s seat. 2 cupholders were also included, however, they were of different sizes.

Even the base version of the Ateca offered good safety with the 7 standard airbags. 2 USB ports were standard, as well as ISOFIX mounting points for easily installing the child seat.

The back seats offered good headroom and legroom for 2 adults.

Standard features also included air conditioning and alloy wheels, however, the cabin was fitted with cloth upholstery and a smaller touschreen display. 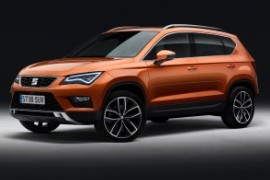