The main advantage of having a passion for quarter-mile dragstrip shenanigans is quite easy to grasp. You are always going to be fully entertained if you always expect the unexpected. And here is a case in point, courtesy of D.R.A.C.S.
31 photos

The videographer behind the Drag Racing and Car Stuff channel on YouTube has prepared yet another enticing feature centered around a shiny-blue old-school muscle, new-school SUV madness, and a little bit of vintage frame-twisting truck prowess. Plus, get ready to experience the joy of low tens at Tulsa Raceway Park.

So, with that being said, we should consider this as enough of setting up the perspective because this time around – unlike many other features on this channel – there are no preemptive passes before the real action kicks off. Instead, a little burnout presentation from the stunningly blue and feisty 1967 Chevy Camaro will have to do, along with that “blink and it still will not go away” nickname for the SUV opponent.

People who thought that both name-calling and derogatory ideas were outdated in the 21st century would better guess again, as this white Jeep Grand Cherokee Trackhawk owner has no shame in flaunting the “Booty Patrol” message on the sides. Well, I am not so sure that any self-respecting lady will even grace this guy with a second stare – at least not after they find out that a 55-year-old car handed his big mouth down the quarter-mile.

But this is exactly what happened, as the old-school muscle car took off like a charm at the green light and held on tight to victory (as proved by the track’s light) even as the ETs said otherwise: 10.22s (‘Maro) and 10.17s (Trackhawk). Now that a GM vs. Mopar brawl was over to the former’s advantage, the second skirmish that kicked off at the 1:10 mark saw the muscle car switch its attention from modern SUVs to vintage pickup trucks.

The Chevy S-10 that came next was certainly no slouch either, as attested by its hoodless presence and the massive frame-twist half-wheelie at the start of the pass. Alas, those moments when not all four wheels touched the ground proved adamant for the little blue Camaro’s second victory of the night. And this time around, it was a clean score of 10.16s versus 10.29s. 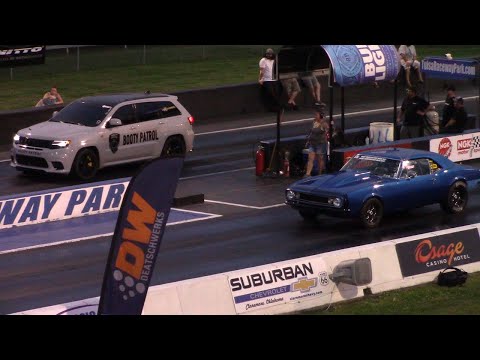