Nissan's S15 Silvia is still fascinating for JDM enthusiasts, even 20 years after the last example left the factory. Even though it is rare and pricey these days, people still buy them and then start tuning them. This example is living an interesting life in the U.S. thanks to serious modifications.
12 photos

While Otis's S15 still has its steering wheel on the right-hand side, despite being in the U.S., the vehicle has been heavily modified. It was previously featured on Hoonigan with its stock SR20DET motor, which has since been replaced. Since that was the most powerful unit offered on the S15, the possibilities for its replacement involved six or eight cylinders.

Some S15 owners go right for the LS swap option, which adds plenty of torque and power from the start, and those looking for even more decide in favor of forced induction. Some conversions focus on six cylinders, and these never seem to stay stock, do they?

Otis, the owner of the S15 in question, has decided to go for an RB26DETT swap, which means an inline-six-cylinder motor that is turbocharged from the factory. Usually, the RB26 was found under the hood of the GT-R, but Otis went ahead and built what Nissan never bothered offering.

With the swap in place, getting a few extras was just a matter of time, and now the motor comes with a significant boost in power. Since this is meant to become a race car someday, the Nissan even got a dog-box transmission. The latter is stronger than the stock unit, but it will make a specific whining noise while driving.

However, this video does not show a road review or a track test, but it does involve donuts and burnouts. The latter happens insanely, as you will observe.

As you will see, you might wonder if the Hoonigan crew needs to organize a safety briefing before filming these kinds of videos, as things got a bit too unsafe, at least from where we are looking, in the last part of the video.

Despite being located in an industrial area of the city, Hoonigan's Tire Slayer Studios probably has an excellent experience with their neighbors, as wild stuff always happens in their backyard, but they manage to complete the shoot each time without having the police called on them. 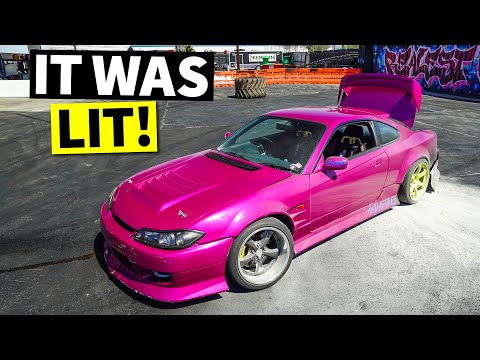