2 1968 Mercury Cougar Has Been Off the Streets for 30 Years, Needs Some TLC

Here is another episode of Solomon Lunger’s “What The Truck” series on his Ford Era channel on YouTube that was filmed at the Hodson Motors “Truck Farm” in Las Vegas, Nevada. Keep that aftermarket outlet in mind because they do crazy fun stuff.
22 photos

Judging by the extremely diverse collection of classic trucks, one would imagine that father and son Derrick and Riley Hodson started everything decades ago. But the guess would be wrong. Instead, the team ventured into vintage Crew Cab territory back in 2015 and they’re already having enough stuff to keep Solomon Lunger’s Ford Era company for a miniseries.

The first miniseries episode showed off a 1964 Ford F-250 that once was tasked with putting out fires for the U.S. Forest Service. Now it’s a hulking 460ci V8 custom that is not afraid to spice up the custom restomod atmosphere. But wait because there is more. A second look around the compound also gave us a 1969 Ford F-800 that rides on a school bus chassis and likes to fake being a big red dually monster.

Now it’s time to meet another prized possession: a 1956 Ford F-600 Crew Cab dually. Notice how a few things tend to repeat, like the fact that all of them have massive proportions and started as a crazy idea with a beautifully quirky background? Well, the latest one is no exception, as it’s “quite a weird one that we’ve got.”

So, let’s break down the idea behind the truck, which goes against their shiny OEM-like credo. It was specifically coachbuilt for an oil company when it was first sold, and it did not come out as blue and rusty until the Hodson team got a hold of it. Actually, the patina was there, only that it was embedded against an orange paintjob.

The color was professionally changed by an artist to Baby Blue because they wanted to pay tribute to grandpa. Also, one can easily check out the cool shine when reaching the interior description moments at the 5:32 mark. By the way, it’s best to just give Riley the space to explain everything – just like Solomon did. The highlights (bagged, Rat Rod exterior/interior makeover, latest restomod toys) make it well (460ci V8) worth it. 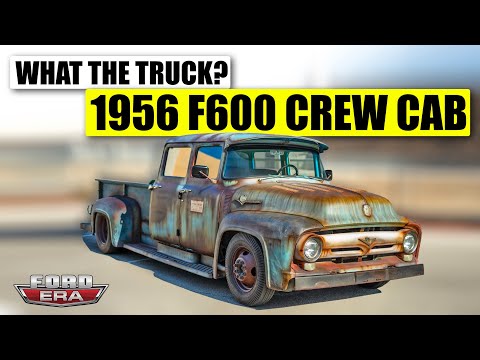