4 2,060-HP Wheelie Huracan Shows Exactly How It Feels to Be the Fastest Drag Lambo

They say that older drivers face higher accident risks, according to a UK study. But I wonder if they also considered the possibility of certain grandpas making sure they would face them smiling. And drop behind their sleeper Subaru Forester a lot of sports cars.
20 photos

Currently, nothing coming out of the sometimes crazy, other times downright insane automotive world should surprise us. But we are allowed to have a warm and fuzzy feeling when seeing someone that might be two generations more experienced than we live life as they're supposed to: “one quarter-mile at a time.” Or something like that, with help from his sleeper Subaru Forester crossover SUV.

Which is now an LSA-swapped supercharged monster! And that’s not even the best thing about the good folks over at That Racing Channel on YouTube giving us a very “old school” joyride. We're happy to see it and amazed by every minute of it. And we can’t stop laughing.

Seriously, when did you last hear someone say during one of their videos (embedded below): “if I go to jail I’m going to be really pissed off. I’m gonna’ tell them you were driving and I’m having a heart attack, so you were taking me to the hospital...” And that’s just an excerpt of what is to be expected.

Behind Mike, the 2013 Subaru Forester stays in the background to allow him to tell the story. Yes, it’s labeled as an STi, but long gone are the days when it spoke the boxer engine language. Instead, it is now a Caddy/Chevy LSA 6.2-liter supercharged monster that sends power to the wheels through an 8L90-E six-speed Cadillac transmission. Oh, and for the record, it does burnouts!

As for traditional things that Subaru owners are preoccupied with, such as mileage, Mike isn’t one of them. Naturally, since his goal is to ultimately get its massive power north of the 700 hp threshold, we wouldn’t care either in his place. Clearly, he knows how to have an enjoyable time when behind the wheel. 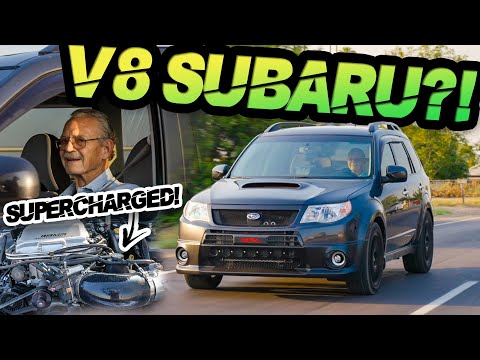