Two very badass automobiles just went head-to-head for your viewing pleasure in this clip, and they both look rather formidable given their modifications and the alleged power levels they’ve tapped into.
7 photos

The Dodge Charger Hellcat and the Chevrolet Camaro SS are not direct rivals by any stretch of the imagination. However, once you consider everything that’s different about these two particular cars, well, all bets are off.

Let's look at their stock numbers first to understand where they were to begin with, performance-wise. The Hellcat version of the Dodge Charger is a straight-up beast, turning what is otherwise a normal mid-size family car into a super sedan. Power comes from a 6.2-liter supercharged Hemi V8, sending the rear wheels a total of 707 hp (717 PS) and 650 lb-ft (880 Nm) of torque. That is all at the crank.

Meanwhile, the Camaro SS features a 6.2-liter LT1 V8 unit, with 455 hp (461 PS) and 455 lb-ft (617 Nm) of torque going to its rear wheels via, in this case, GM’s eight-speed automatic gearbox. One advantage the Camaro does have over the Charger Hellcat is weight—or lack thereof.

Now, let’s consider all the modifications these two cars underwent, starting with the Hellcat, which boasts full bolt-on mods with a ported blower and an E85 setup, resulting in an alleged 1,000-wheel horsepower, which is roughly 1,150 hp at the crank, give or take.

As for the Chevy, it’s got full bolt-on mods of its own, heads/cam setup, meth injection, an LT4 supercharger, and drag radials. According to the uploader, it produces about 800-wheel horsepower, meaning 950 or so horsepower at the crank.

When you’re dealing with this much power, putting it down quickly and efficiently is key. Unfortunately for Dodge fans everywhere, that Hellcat struggled to keep up with the Camaro, which took off the like it was in a Road Runner cartoon. Yes, you can see the Charger begin to claw its way back after a while, but at that point, it had already lost the race. 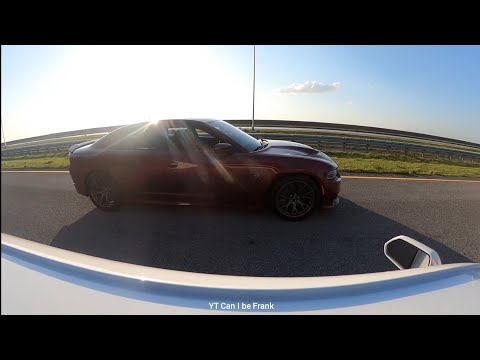