1 Procharger Chevy Nova Flexes Big Muscle at the Track, Gets Gapped by Mustang

5 2003 Ford Mustang With Turbo Coyote V8 Smokes All Competition at the Drag Strip
Car video reviews:
Up Next

A few days ago, you saw a supercharged Ford F-150 pickup truck put up a decent fight against a tuned Mustang GT before eventually succumbing to the laws of physics at high speed, as the Mustang came flying past.
7 photos

It’s that very same F-150 that can now be seen racing a mildly tuned Dodge Charger Hellcat, only this time it managed to come out on top. How, you ask? Well, let’s just say that a Mustang GT ten-speed with roughly the same amount of power as a stock (or nearly stock) Hellcat is much quicker than the Dodge, thanks to a superior gearbox and less weight overall.

What makes this truck so competitive is the fact that it comes with a Roush 2650 supercharger, as well as an E85 tune, combining for a total output that stretches beyond 750-wheel horsepower, which means more than 900 horsepower at the crank, seeing as this is an all-wheel drive vehicle.

With nothing but a cat delete/cold air intake setup, the Hellcat probably puts down an extra dozen or so horsepower, compared to its stock figures of 707 crank hp (717 PS) and 650 lb-ft (880 Nm) of torque. All of that comes courtesy of a 6.2-liter supercharged Hemi V8, which is a proper beast of an engine in its own right.

The two vehicles raced each other twice, although we can only consider the second pull, given that on the first attempt, one of the drivers was clearly not paying attention. As far as we’re concerned, the F-150 stayed ahead of the Charger long enough for it to be considered a proper win. If they had raced over a longer distance, the Dodge super sedan would surely have caught up to the truck. 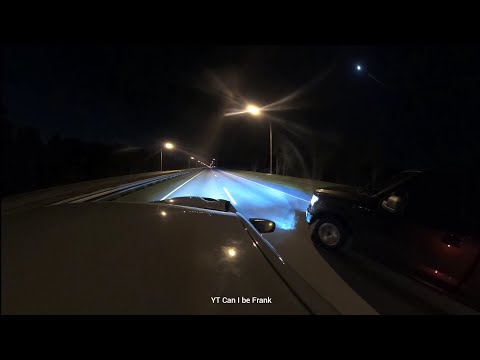