Would you race a nearly stock Dodge Charger Hellcat if you had a tuned second-generation Cadillac CTS-V? It would probably depend on how much horsepower you had at your disposal, sure, but if it’s an alleged 700 horses at the wheels, would you even hesitate?
6 photos

Perhaps you should; at least that’s what we got out of seeing this 700-WHP CTS-V struggle to edge out the Charger Hellcat, which by the way, only featured a cold air intake mod and a cat delete. The cold air intake adds very little additional power, so we might as well look at the Hellcat’s stock numbers exclusively.

Powering the Dodge is a 6.2-liter supercharged Hemi V8 engine, producing 707 hp (717 PS) and 650 lb-ft (880 Nm) of torque. All that grunt reaches the rear wheels with the help of an eight-speed automatic gearbox. This looks like the exact same Charger that raced a tuned 2019 Mustang GT the other day, a race which it eventually won, but just barely.

We all know what a stock/near stock Hellcat can do, but what about a modified second-generation Cadillac CTS-V? According to the uploader, the Caddy is playing with just over 700-wheel horsepower, which by our calculation, means it’s putting down about 830 hp at the crank—maybe more, maybe less, but that’s the ballpark.

There’s no denying the second-gen CTS-V is a quick car. It could hit 60 mph (97 kph) in 3.9 seconds while covering a quarter-mile in just 12 seconds flat. Of course, it would be no match for a Hellcat without mods, but whether this one actually has 700-wheel horsepower as stated in the clip, well, we’re not exactly sure given the outcome.

We should also mention that after it was done with the Caddy, that Hellcat went on to race two more cars—a Mustang and a Camaro, both featuring bolt-on mods. 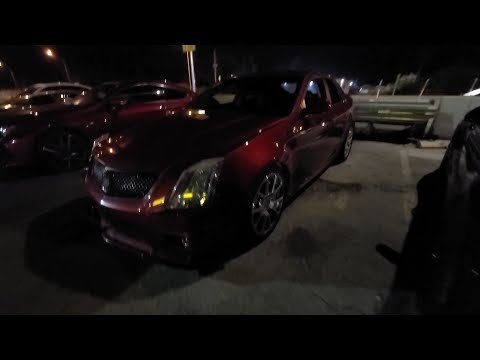