2 Did Aliens Plant This Monolith in a Remote Area of Utah Or Is It Art?

3 An Unhinged Tale: Audi Crashes Into Porch, Drives Off With the Front Door

4 Gone in 30 Seconds: New Owner Has Car Impounded After Driving It Off the Lot

You Don’t Need 4 Wheels to Drive a Yukon, but Stopping at the Lights Is a Must

Because we all have video-recording cellphones and dashcams, we’re flooded daily with massive amounts of content to go through and digest. This one will probably be an odd pill to swallow while serving as a lesson on what not to do in traffic.
7 photos

According to the person who posted it to YouTube, this went down in southside Chicago, on Garfield Boulevard, on November 18. The video is titled “Road Rage,” but there’s no indication in it that there was some type of altercation we’ve come to refer to by that name: just one crazy, completely reckless driver stepping on the gas of his three-wheel GMC Yukon. Four wheels are so 2019!

The video starts with the Yukon being driven at considerable speed on a city street, despite the fact that it’s missing one wheel. The SUV is screeching, smoking, and spitting sparks, so this was a fortunate coincidence that it happened at night.

Perhaps stranger than the sight of the three-wheel SUV desperately trying to make it to the destination, wherever that might have been, is the fact that it’s stopping for the lights. Technically, the driver only stopped at the first set of lights and attempted it a second time, before rushing through on red. This gives the filmer a better look at the SUV, which is resting so low on the passenger side that the rear wheel on the driver’s side is no longer touching the ground and spinning freely.

It’s an unbelievable video made even stranger by this person’s apparent desire to obey regulations for traffic lights. If you think that the Yukon is probably stolen (which would explain the driver’s rush and the fact that it’s missing its license plates), stopping at the lights is even funnier.

Clearly, for this one man, driving an SUV is not dependent on the SUV having four wheels or even being stolen property, but goddammit, he will not run a red light! At first, at least. 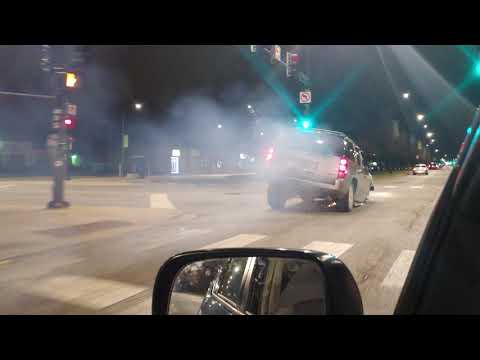