GMC refreshed the second generation of the Terrain SUV in 2021 for the 2022 model-year and gave it some restyled lines and turbocharged engines.

After four years since the introduction of Terrain's second generation, GMC came with a mid-life cycle refresh for its compact SUV. The new version brought the AT trim level, which was focused more on off-road abilities. Even though the Terrain was not an off-road vehicle, it could handle some rough areas, mud, and snow.

On the outside, the 2021 Terrain showed a different front fascia, with taller headlights and C-shaped daytime running lights. Its twin LED headlamps were stacked one on top of the other. While the rest of the bodywork remained the same as its predecessor, including the taillights, GMC introduced four new colors.

Inside, GMC enhanced the infotainment system and included the wireless Apple CarPlay and Android Auto as a standard feature for the entire range. For the Denali trim level, GMC had an 8" infotainment as part of the package. Another useful feature was the head-up display, which became available as an option for the SLT and AT4 versions and standard on the Denali.

Under the hood, GMC kept most of its previous engines and added an inline-four turbocharged gasoline engine paired to a nine-speed automatic transmission. Its state-of-the-art direct-injected system and variable valve timing made it very fuel-efficient. 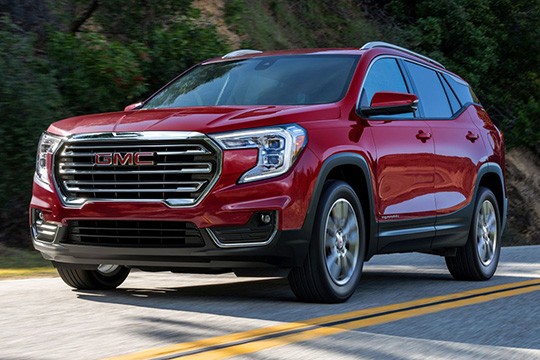