Do you remember that time when Deus Ex Machina came up with a dull bike? Right, neither do we.
20 photos

When the pros over at Deus Italy get their hands on a competent donor like the Yamaha Tenere 700, the end results are bound to be extraordinary. I mean, there’s a good reason why Deus Ex Machina became the worldwide phenomenon we see today, and their garages don’t seem to be planning on hitting the brakes anytime soon!

For their Tenere-based project, the Italians aimed to infuse Yamaha’s adventure bike with a healthy dose of ‘80s Dakar styling. Starting with the bodywork, Deus enlisted the help of Camal Studio to design a bespoke outfit using digital renderings. When the 3D-printed mock-ups were delivered, the crew proceeded to shape a complete fiberglass attire that looks ready to conquer the sand dunes.

One of the first things you’ll notice is a beefy fuel tank enveloped in Deus graphics, followed by a snazzy tail section that sports aftermarket blinkers and an LED taillight. At the front end, we’re greeted by an enduro-style fender and one rugged fairing, hosting a state-of-the-art headlamp and minute turn signals.

To make sure this beast handles as well as it looks, the experts installed a premium pair of Andreani forks up front, along with a single piggyback shock absorber from Ohlins on the opposite end. You will also find an assortment of juicy bolt-on accessories, such as a menacing skid plate and new Acerbis hand guards, among other items.

In terms of plumbing, the Deus team got in touch with SC-Project to obtain a custom-made titanium exhaust, the sound of which may be heard in the YouTube video below (for a brief instance). Last but not least, the finishing touch comes in the form of dual-purpose Karoo Extreme rubber from Metzeler’s inventory. Machina’s masterpiece was set to appear at the Wheels & Waves festival, but the event ended up being canceled thanks to the illness that shall not be named, which is a real bummer indeed. 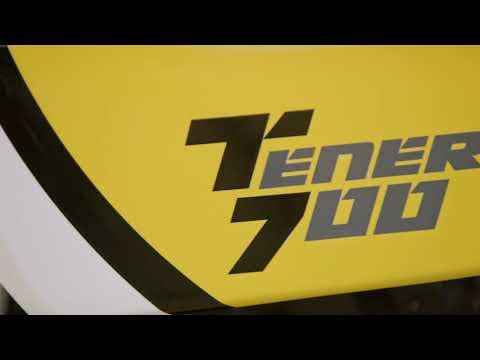