4 Ghostbusters Wagon Rendered as 2021 Cadillac: Who You Gonna Call?

I have been collecting diecast vehicles for as long as I can remember, and right now, I'm up to a few hundred cars and motorcycles in various shapes and sizes. And part of that collection is dedicated to movie cars. I've got a few DeLoreans from "Back to the Future," there's also a "Mystery Van" from "Scooby-Doo", and of course, I could not forget about my 1:64-sized Ecto-1.
18 photos

Growing up in the '90s, I started watching movie after movie on my family's VCR set, and after I was done with the "Back to the Future" franchise, I found myself hitting play on the 1984 hit that was "Ghostbusters." And I was immediately hooked by the idea, the music, and the Ecto-1. Remember the siren? Whenever that thing would go off, you knew something was about to go down. And I guess it's not far-fetched to call the Ecto-1 the most famous hearse the world has ever known.

It was just recently that a 1959 Cadillac Superior Hearse went under the hammer at a Barrett-Jackson auction in Las Vegas. It isn't an original film vehicle, but an Ectomobile Replica built by a fan, which is still considered road-legal. And you know how it goes. If there's something strange in the neighborhood, you might as well have a 390-cubic inch V8 under the hood of your Superior Hearse so that you may efficiently engage in ghost-busting activities.

The engine is mated to an automatic transmission, both of which have been rebuilt back in 2012. Some additional maintenance was performed in 2018, as the brakes were upgraded and the driveshaft was replaced. Multiple other mechanical upgrades have been made, aiming to give the car a more modern feel and to make it more reliable at the same time. The ignition, carburetor, fuel pump, cooling, and batteries were all replaced to achieve that goal.

At the moment the car was displayed at the auction, its odometer displayed 11,250 miles (18,105 km), so there's still some life left in it. Interestingly enough, the interior of this hearse is all original, and it has even been signed by eight members of the cast and crew. No Ecto-1 replica would ever be complete without props and accessories, and no disgusting green blob will be capable of surviving the combined power of four proton packs and other anti-ghost gear stored in the back of the car.

In case you've never done any research on the Proton Packs, they weigh about 35 lbs (15.87 kg) each, and all four should set you back some $6,000 if you'd want to buy them separately. But back to the main scene in Las Vegas, from the moment the auction started, it only took two minutes for a winner to emerge from the crowd. It only took about 10 seconds for the highest bid to go up at $30,000 and another 20 seconds for that amount to be set at $100,000.

By the end of it all, the car sold for a record $200,000! Just imagine that back in 2010, an original Ecto-1 was sold at the Barrett-Jackson auction for $80,000. The winner of the auction hails from British Columbia, and he runs a business revolving around hero cars. We're talking about cars from "Back to the Future," "Jurassic Park," "The A-Team," "Smokey and the Bandit," and it looks like they're building a replica of the "Wayne's World" 1977 AMG Pacer as well. So if you want to rent an Ecto-1 for the day, now is your chance, although it's not going to be cheap! 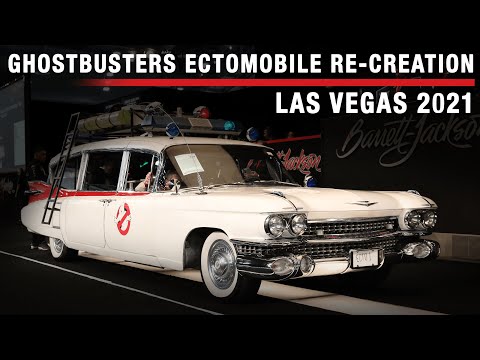