Cadillac finally introduced a V-version for its much-acclaimed Escalade range and entered the competition in the performance-SUV segment with its biggest rig on the roads.

While it was not meant to challenge vehicles such as Porsche Cayenne Turbo or the Mercedes-AMG SUVs in terms of handling performances, the Cadillac Escalade-V offered a more luxurious presence backed up by comfort and convenience features. The carmaker aimed more at its local competitors, such as the Grand Wagoneer from Jeep and the Lincoln Navigator.

In terms of styling, the big SUV revealed a blacked-out grille instead of the chromed one installed on the rest of the range. A pair of vertically-mounted air-scoops hosted the LED daytime running lights while in charge of expanding the cooling capacity was a lower grille placed in the front bumper.

The angular, muscular lines of the vehicle were emphasized by the black side sills and big light-alloy wheels. In addition, the blacked-out B-, C-, and D-pillars created the sensation of a floating roof design. At the back, a quad-exhaust with rectangular tips flanked a useless diffuser placed under the bumper. Its roof-spoiler was there mostly to keep the rear window cleaner for longer than for downforce performance.

Like its non-V version, the Caddy-V came with independent suspension in all corners backed up by an adaptive suspension that increased the comfort or handling, depending on the driver's preferences. 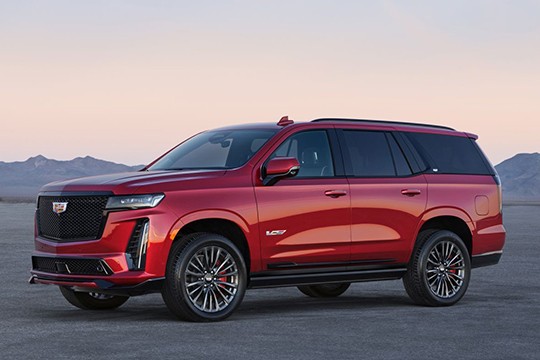 5 Cadillac Celestiq MSRP To Be Higher Than That of a Bentley Flying Spur, Bling Is Costly