1 Chevy Nova SS Spent Decades in Storage, One More on the Road, Is Now Worth $45K

In the world of supercars, there’s really no cutting corners when it comes to designing and the building the perfect machine. This also applies to Splinter, (still) the world’s only wooden supercar, built by Joe Harmon of Joe Harmon Design.

Splinter is not new to the scene: we even covered it ourselves back in 2012 and then in 2015, when Harmon had started building it. The idea for it actually began to emerge way before that, in 2007. Now, after nearly ten years in development, Splinter is complete and, despite the long time lapse, still as impressive today as it was back when it was first announced as an in-progress project.

Harmon spoke to the media last month about his supercar and how he’d always wanted to be able to design his own. At the same time, though, he wanted to make it different, so he started toying with the idea of making it out of wood. Wood, if exploited properly, is the only truly renewable and fully biodegradable resource we have, and it also has certain advantages in terms of strength-to-weight ration over steel and aluminum.

While an undergrad at North Carolina State University, Harmon was able to finally delve deep into this project. He credits his father for that, because he picked up the tuition bill so he, Harmon, didn’t have to work to cover it. Instead, he focused on just his idea, which he envisioned as a study into the possibilities of using wood in the automotive industry.

Clearly, he never imagined he would end up toiling over Splinter for the following decade. Or, as he puts it: it was a lot of work, pain, sweat, tears and sanding. But mostly sanding.

Splinter has over 20 species of wood in the body and interior, and is made of wood up to 90 percent. Put it simply, everything that could be made of wood was made of wood, down to the wheels, the gear shifter, the steering wheel and even the gauges showing RPM and speed. We often hear that something is a “work of art,” but it’s rarely as accurate as it is in this particular case.

For one thing, Harmon didn’t use sculpted wood for the chassis and body, because that would have added considerably to the weight. Inspired by the WWII airplane de Havilland Mosquito, the fastest piston driven plane of its era made of wood, Splinter is made of panels of wooden composites. Bent and molded laminates were secondarily riveted and then bonded together to create the body – a very time consuming and difficult process. The chassis is mostly birch and maple, while the wheels are walnut.

And make no mistake about it, the wheels are wood, too. Made of 275 individual pieces each and once described as the “most difficult” part to make, they have metallic centers that serve as reinforcements for the rotary-cut oak veneer. Harmon says that each wheel has 10 spokes and is able to withstand 2.7 tons of weight before breaking. The tires are probably the only off-the-shelf item on the car.

Splinter is powered by a Chevy LS7 V8 engine, though initial reports said a highly modified Cadillac engine from the Northstar series would be used. It’s mated to a six-speed manual Corvette transmission and makes some 650 horsepower. The gear shifter is unlike anything you’ve ever seen before: a long shaft resembling a baseball bat, that moves the shift linkage sitting over the engine.

Sitting very low on the ground, Splinter has adjustable suspension because it needs to be able to get on trailers without damage to the body. In theory, this would also serve it well if it would be taken on the roads – which it could be, since it’s perfectly drivable.

Naturally, one of the biggest issues with Splinter is overheating. The exhaust has been moved away from the chassis and doesn’t touch any wooden surface. And, while that Chevy engine is able to take this wooden baby to an estimated, purely theoretical top speed of 200 mph / 321.8 kph (aerodynamics and weight factored in), Harmon never drove it faster than 30 mph / 48.2 kph. As he puts it, most cars can catch fire pretty quickly, but his is of the kind that would burn to the ground completely if that happened.

“It's hot, noisy and uncomfortable,” Harmon says, slipping into the hand-woven driver seat through the window, because Splinter has no doors. “Can't see out of the back of it, can barely see out the front of it, you're in a really really low driving position,” he continues, before musing that this is what probably makes it so “raw and exciting.”

Splinter is “not exactly the most practical vehicle in the world,” apparently. That’s the understatement of the century, alright. But what Splinter has going in its favor is the title of the only wooden supercar in the world – still as gorgeous today as it was 10 years ago. 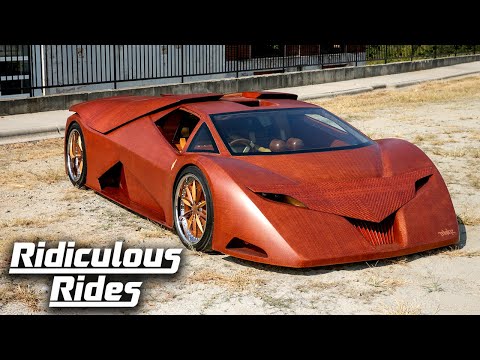 Shoot for the Moon With Your Very Own 1969 NASA Saturn V Rocket: Powered by CO2 CartridgesSee all coverstories