Have a wild guess which is the most affordable brand-new electric vehicle on sale right now in the United States. If the Nissan Leaf sprung to mind, I’m afraid that’s not the right answer because MINI - a premium brand - undercuts the Japanese hatchback by a handful of bucks. More to the point, the Cooper SE costs $29,900 sans the $7,500 federal tax credit.
7 photos

The biggest drawback of the MINI Cooper SE over the Nissan Leaf and pretty much every other electric vehicle available today in dealer showrooms is the range. With 114 miles (183 kilometers) worth of juice from a 32.6-kWh battery, this fellow is no highway cruiser by any conceivable measure.

Despite this niggle, the British hatchback is unusually hard to find on the lot according to Roman Mica. The Fast Lane’s head honcho and Tommy Mica traveled from Colorado to New Mexico and back to Colorado for the blue-painted model in the following video, which is a lot of driving for an urban dweller that replaces the crew’s long-term Tesla Model Y Performance.

Bought for $35,500 or approximately $25,000 after federal- and state-level perks (Colorado currently offers a $3,500 tax credit for electric vehicles), the car is pretty much loaded. But nevertheless, the journey home can only be described as uneasy over the low average speed and the great distance between charging stations. On the upside, the Cooper SE can restore up to 80 percent of its EPA-rated driving range in a little over half an hour at a Level 3 direct-current station that juices up the battery pack at up to 50 kW.

Roman estimates the journey to have taken almost four hours longer when compared to a combustion-engined car. Tommy is extremely pleased with how quiet the car is and how nice it drives, but all things considered, the MINI Cooper SE fares a lot better in the urban jungle than on the open road. 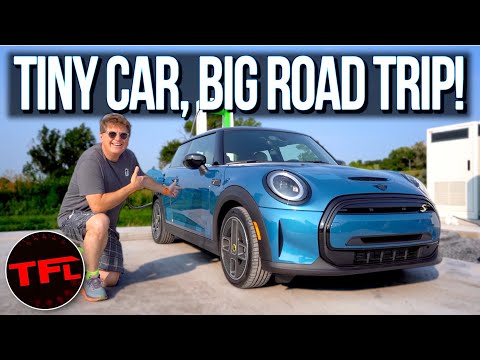