You’ve waited a long time for this particular showdown, and The Fast Lane is much obliged to deliver. For 18 minutes, Tommy Mica compares the hottest off-road utility vehicles of the moment for you to decide which is the better one.
108 photos

In the red corner, we have a Badlands trim level with the Sasquatch Package. And in the green corner, the Wrangler Rubicon keeps it classy with a Premium Tan Sunrider soft top that retails at $795 for the two-door variant.

From a visual standpoint, the most important difference between the Bronco and Wrangler comes in the guise of width. Jeep offers larger fender flares than Ford, but the curvaceous hood sides make the Rubicon feel a little small compared to the Sasquatch. The same can be said about the all-terrain rubber, which measures just around 33 and 35 inches, respectively.

Another point of contention is the front suspension layout, namely a solid axle for the Wrangler and IFS for the Bronco. There are certain advantages and disadvantages to both designs, of course. The solid axle is better in rock-crawling situations thanks to superior articulation, while double wishbones and coil springs are better on the road and for high-speed driving on sand.

While on the subject of going off the beaten path, customers who intend to remove the doors will prefer the Bronco over the side mirrors, which are mounted onto the A-pillars instead of the doors. The windshield folds in the Jeep’s case, but the interior of the Ford feels a little more spacious and chunkier. Tommy compares the Bronco to being seated in a mid-size pickup, which is funny because the Bronco sits on the same ladder frame as the 2023 model year Ranger for the U.S. as well as international markets.

Tommy further makes a point about interior quality. Some of the plastics used by the Blue Oval in the Bronco feel cheap, including the central transmission tunnel that comes into contact with one’s hands very often because that’s where the cup holders, grab handle, and phone cubby are.

There’s no cross member that connects the ends of the sports bar in the Bronco, which is why the newcomer gives a better feeling of roominess in the cabin for the rear passengers at the expense of sound quality due to the location of the audio speakers. Tommy Mica further mentions at least as much rear legroom in the Wrangler as in the Bronco and much less of a jump in the trunk if you fold the seats into the floor for extra cargo capacity.

On the oily bits front, Ford has the upper hand in terms of manual transmissions thanks to a seven-speed stick shift with a crawler gear, and the Blue Oval also has more ratios in the 10-speed automatic. Engine-wise, the 2.3- and 2.7-liter EcoBoost compete against a 3.6-liter Pentastar V6, a 2.0-liter Hurricane I4, a 3.0-liter EcoDiesel V6, plus a 6.4-liter HEMI V8.

These two direct rivals are pretty much tied in terms of towing, payload, approach angle, and departure angle, although the Bronco offers a better breakover angle and more ground clearance for the four-door body style. Around 300 pounds (136 kilograms) heavier, the Ford also happens to be approximately $400 less expensive than the Jeep in their base specs.

And finally, The Fast Lane promises a week of trashing off the beaten path in Colorado before deciding which is the better pick on uneven terrain. 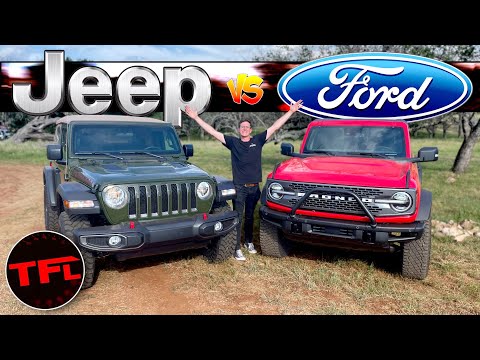