The third generation of Mini was introduced in 2013 and, as usual, it received a convertible version for the delight of those who want to enjoy an open-air driving experience.

The MINI Convertible was the first open-top small-segment vehicle on the market. The most difficult part was to make the car stiff enough for a sporty ride, but comfortable as well for a relaxed one. For that, it was offered in several versions, including the John Cooper Works version.

At a glance, the new generation of the MINI looked the same as its predecessor, but the differences were in the details. The car featured new headlights with chrome rings and a hexagonal radiator grille. There were new turn-signals and a black periphery around the bottom edge of the body. The longer wheelbase and short overhangs made room for a bigger interior and an increase in the trunk space.

The MINI convertible offered four seats, but the room in the back was not that big. It was enough if neither one of the occupants was taller than 1.75m (5.7 ft). A new infotainment unit was installed on the car and it counted the minutes the driver drove with the top down. The soft-top could have been opened and closed within 18 seconds at speeds up to 30 kph (18.2 mph). 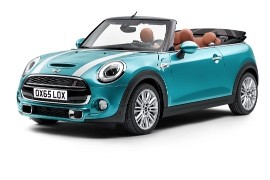