3 Stellantis to Kill the Two-Door Jeep Wrangler in Europe

In the Netherlands You Can Rent Houses That Are 3D-Printed

The 2021 Ford Bronco may be all the rage, but Tommy Mica of The Fast Lane purchased a new Jeep Wrangler instead. The question is, why?
16 photos

For starters, Tommy considers the Bronco to be a little too wide. The JL is narrower, therefore better on tight trails and in congested urban areas. Another point against the Bronco is first-year production, which is typically full of issues that are sorted on the go in preparation for the second year.

This brings us to the Defender that threw a check engine light after two days and 167 miles (269 kilometers). To make a long story short, not even Land Rover could figure out what was wrong with the brand-new utility vehicle.

Turning our attention back to the Bronco vs. Wrangler showdown, Tommy makes a case for the 3.6-liter Pentastar V6 over the 2.3-liter EcoBoost four-cylinder turbo. More to the point, he argues that a free-breathing motor of a larger displacement is more reliable in the long run than a force-fed motor.

In theory, it’s a correct assumption. But in the real world, don’t forget that Stellantis North America uses engine technologies from the Fiat Chrysler Automobiles era. And as we all know, FCA is not a byword for reliability.

Another purchasing factor was the Wrangler’s straightforward canvas top, which is a factory no-cost option. The Ford Motor Company, in its infinite wisdom, sells the two-door Bronco with a hardtop at the time of reporting.

The first-ever new vehicle Tommy bought with his own money is also considered inferior to the Bronco in terms of on-road driving, but in truth, even the big-tired Rubicon feels alright on public roads. And finally, a new Wrangler can be purchased off the lot while many Ford Bronco customers will be pushed into the 2022 model year because of the sky-high demand.

The red-painted Wrangler that Tommy made his own is a Willys Sport trim, which retails from $31,145 excluding destination charge. With just a couple of options, including the Customer Preferred Package and air conditioning, the total price of his two-door Wrangler is $33,935 including the freight tax. 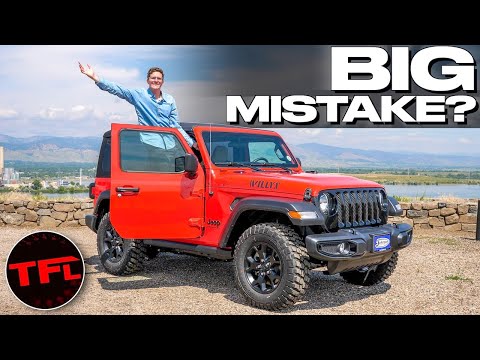