When it was launched in 2016, the MINI Countryman was the biggest MINI ever made by the British manufacturer.

It wasn't that mini-vehicle anymore.

The MINI customers started to ask for roomier interiors and real seating for at least four adult passengers. A 5-door MINI was brought on the market and it was loved and hated at the same time. It wasn't a MINI anymore, but it wasn't something else either. Then, the Countryman was shown and that shut some critics away. The crossover and SUV market grew fast after the year 2000 and a MINI Crossover was better received than a simple, 5-door MINI.

From the outside, the Countryman was unmistakable. It was clear that it belongs to the MINI brand. The front fascia, with the rather angular headlights and the specifically shaped grille, were kept. The extended roof and the addition of an extra pair of doors transformed the MINI into a family SUV. It even received an all-wheel-drive system, named All4 for the Countryman. All of a sudden, the car was not competing into the small-segment but rather into the small-SUV market against the Audi Q2 and the Nissan Juke. Unlike its sibling, the Clubman, the Countryman featured a single-piece liftgate. The flared wheel-arches with black plastic trims enhanced the off-road appearance.

Inside, the dashboard featured the typical MINI design, with a big, round, center-mounted screen for the infotainment unit and the speedometer. In front of the driver, there was a round analog dial and a side smaller panel with warning lights. In the rear, there were sliding and reclining seats for the outboard places.

The Countryman was offered with a choice of diesel and gasoline engines, with front or all-wheel-drive, with manual or automatic transmission. 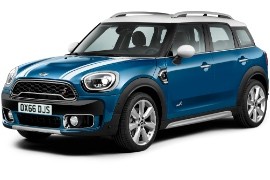