We all know how much Photoshop goes into the pics supplied by automakers to the media. The same applies to promotional videos, and as such, a car often looks different in real life.
31 photos

Take the Z Proto as a case in point. Thanks to a walkaround video from JDM Masters, you can clearly tell how different the concept looks up close and personal as opposed to official materials from Nissan. Filmed in Yokohama, the Japanese coupe is marketed as the Fairlady Z in the Land of the Rising Sun rather than 400Z in the United States.

“What about Europe and the United Kingdom?” Sorry folks, but Nissan has recently confirmed that it can’t make a case for the Z in that part of the world. You can blame emissions regulations for that, but there’s another reason the Old Continent will miss out on this fellow. To put it bluntly, sports car sales figures are on a downward spiral.

From an aesthetic standpoint, the 400Z stands out as a perfect blend of modern and retro, as in a better proportion between the two opposites compared to the MINI and Volkswagen Beetle. The design team has also kept things simple, so simple that the Toyota GR Supra looks grotesquely overstyled by comparison. Thankfully, there are no fake vents here.

The interior isn’t meant to wow you but to entice the driver to start ‘er up and search for a winding road. A digital instrument cluster, gauges on top of the dashboard, a central touchscreen, and a good ol’ manual gear lever are featured, which brings us back to the GR Supra.

You see, Toyota decided against a stick shift in six-cylinder versions of the Supra, leaving customers with the ZF 8HP eight-speed automatic transmission we know from rear- and all-wheel-drive BMWs. Coincidence or not, the 400Z will also feature a six with forced induction.

The 3.0-liter V6 from the Infiniti Q50 Red Sport 400 is the most likely culprit. Officially, the Japanese automaker couldn’t say more than “V6 twin-turbocharged engine.” No output ratings, no zero-to-60 time, nada! 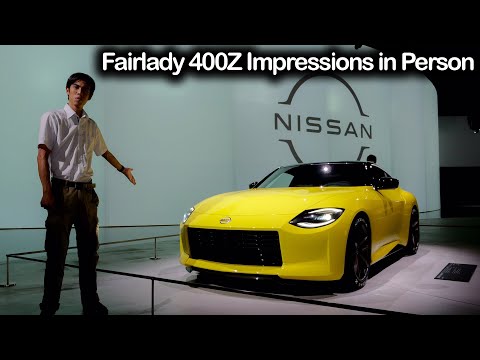