1 NSX Acura Takes On a Ferrari SF90 Stradale on a Drag Race, Owner Trades It Immediately

Aurel Niculescu
Many people head to the dragstrip for traditional quarter-mile skirmishes in search of the elusive “best bang for the buck” aftermarket build. And, for the most part, this feature has a couple of GT heroes brilliantly filling the role.
40 photos

With Ford’s Mustang being the original pony car legend that it is, a lot of people will rightfully fall in love with the GT and its potential for upgrades, especially when taking into consideration the S550 generation and the ten-speed auto transmission. And the videographer behind the “Drag Racing and Car Stuff” channel on YouTube shows a host of “mostly supercharged American muscle racing” before something odd appears.

The heroes of the channel’s latest video (as of April 9th, 2022) embedded below are a couple of Ford Mustang GTs from the 2019 (white) and 2021 (black) model years, as they set out to find VMP Performance supercharged glory at Orlando Speed World Dragway in Bithlo, Florida both under the sun’s bright daylight and late at night. And they sure had a roster of magnificent opponents.

First up for the challenge against the menacingly dark VMP representative was a Rapid Red Metallic (with black stripes) Ford Mustang Shelby GT500. That set everything into the proper, winning aftermarket perspective and made way for the first Blue Oval vs. Mopar brawl, the white VMP ‘Stang duking it out with a Dodge Challenger Redeye late at night from the one-minute mark.

The white GT made short work of its initial challenger (10.27s vs. 10.57s) and then moved on to a Cadillac CTS-V (from 1:30) just so that GM fans would not feel neglected either. This one was photo-finish material given the 10.22s vs. 10.24s victory and then from the 2:18 mark, another Challenger (a Super Stock, according to the description) tried to enact revenge for the Mopar team.

Alas, it was all in vain – according to the track’s light – and equally futile was a fourth-generation Camaro’s attempt to show the black Mustang who is boss from the 3:11 mark. However, just as we thought that nothing is above this couple of VMP-enhanced Mustang GTs, there is also a bonus race at the 3:38 mark between the black Ford and... a rotary-powered Toyota Starlet (a 60 series, it seems)! And it is not one that you would want to miss, seriously! 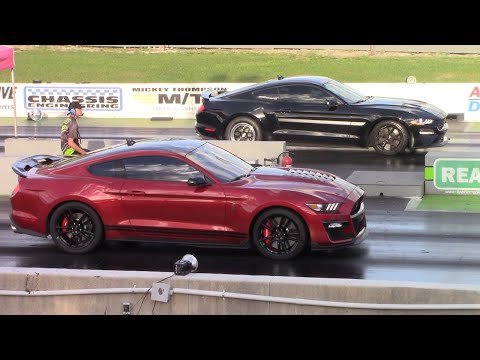