2 Nitrous Ram TRX Drags Wheelie Mustang and Nova, Someone Gets Blown Away

Video: Ram 1500 TRX Forces Itself on a Charger 392, That Probably Hurt

Ah, yes, the Ram 1500 TRX, aka one of the coolest trucks that money can buy. It’s been a while since we’ve last seen it in action at the drag strip, but it’s back, leaving its mark on several drag racing events, including the Diablo Horsepower Wars.
6 photos

Organized towards the end of last month, at the Orlando Speed World Dragway in Florida, it saw this black copy go to war against a few ultra-fast machines. For the most part, it asserted dominance over them by crossing the finish line first, yet it wasn’t a flawless victory, as it eventually met its match.

We’ll delve into that in a few moments, but first, let’s remind ourselves what makes the Ram 1500 TRX a dominant workhorse on tarmac and for that, let’s virtually pop the hood and take a look at the 6.2-liter HEMI V8. The supercharged engine, shared with the Hellcats, and the Jeep Grand Cherokee Trackhawk, gives it the upper hand against other high-riding beasts.

With 702 horsepower and 650 pound-feet (881 Nm) of torque bouncing off the walls, channeled to the four-wheel drive system through an eight-speed automatic transmission, the 1500 TRX needs 4.5 seconds to hit the 60 mph (97 kph) mark from a standstill. Flat-out, it will do 118 mph (190 kph), which doesn’t seem that impressive at all, though hitting it in a safe and legal environment is easier said than done – unless we’re talking about the drag strip, obviously.

As far as its first ad-hoc rival in the quarter-mile battle depicted on video down below goes, it was the Dodge Charger 392. It’s obvious that the balance tilts in favor of the truck in terms of power, but since it is much heavier than the muscle sedan, its straight-line performance is actually similar. So, can it put the bad Dodge in its corner? Only one way to find out. 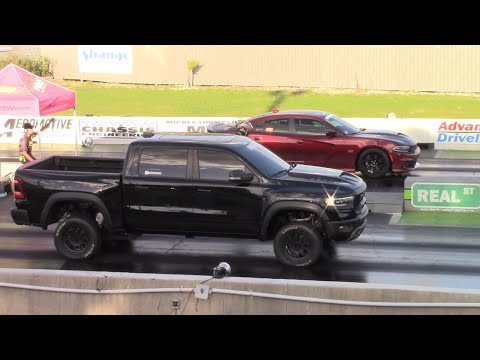