5 Project Maybach by Virgil Abloh Is a Luxurious Take on a Rough Electric Off-Roader
Car video reviews:
Up Next

2023 BMW M4 CSL Is Due Tomorrow, Check Out the Latest Teaser Images Here

Even the most pampered multi-millionaire must have moments when they go, “today, I feel like off-roading.” Famous designer Virgil Abloh imagined the kind of off-roader one such person would want and created Project Maybach.
12 photos

Project Maybach is one of Virgil Abloh’s final projects before he passed away in late 2021 after a secret battle with an aggressive form of cancer. It’s a concept only, and because of it, it’s not bound by the limitations of production vehicles. Still, as wild as it sounds on paper, it’s even wilder in person.

Carfluencer (*an automotive influencer) Supercar Blondie got to see it for herself while on display in Monaco just recently. You can see her presentation in the video below, but a few words to sum it up would probably go something like this: this is a monster of an off-roader, fully-electric, uncompromising, stylish, luxurious yet still pretty functional, all things considered.

Designed by Abloh, Off-White founder and Louis Vuitton creative director, and Gorden Wagener, Mercedes-Benz Chief Design Officer, Project Maybach stands out for its impressive stature. It’s very long (236.2 inches / 6 meters) and impressively tall, and it uses all that real estate to offer camper-like amenities for a couple of rich adventurers.

The gold / beige exterior bespeaks the utilitarian, industrial styling inside, but with plenty of luxury touches. Even the ax comes with the Maybach logo and a custom handle engraved with Abloh’s name. When you’re this rich, even the simplest things have to have some kind of personalized touches.

Supercar Blondie is impressed by the size of the show car and its functionality, particularly the way in which the interior turns into a camper. You fold down the seats and get single beds, with an integrated reading light above the head and some storage on the side of the door. Presumably, that’s when the massive, fold-away display on the dashboard would come in handy, used as a TV before bedtime.

Project Maybach doesn’t have a drivetrain, but it’s conceptualized as fully-electric, with solar panels in the hood to add juice to the battery. This too becomes a style testament under Abloh’s guidance, with each solar cell carrying the Maybach logo, and visibly so. The same logo is integrated int the rear lights.

Perhaps more impressive than the idea behind Project Maybach is its execution. Though this is only a show car that doesn’t move under its own power, it’s beautifully put together, with incredible attention to detail and the finest materials available. Expensive cars are often described as works of art, but this concept is where the phrase fits best. 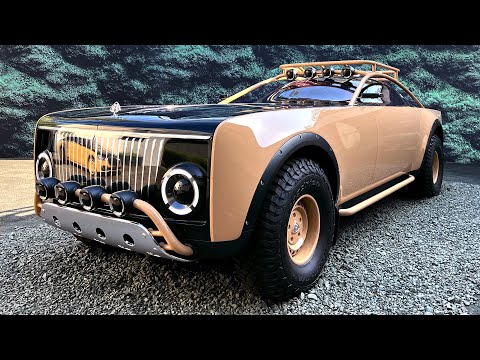 Editor's note: Photos in the gallery include official shots of Project Maybach by Virgil Abloh.