In 2009 the world was in deep economic crisis and the luxury brands had to adapt and, while Rolls-Royce was ready to launch a new base model, Maybach showed another expensive, half of million euros, limousine.

The German brand Maybach was the epitome of German luxury before WWII. Its cars were built on special orders only and the bodyworks were built custom for each and every client either by the manufacturer or by supliers.

In March 2009, at the Geneva Motor Show, the newest creation from the Maybach was unveiled. The 62 Zeppelin model was based on the long-wheelbase model of the luxurious car. It features different painting scheme in two tones. The Zeppelin gets special 20-inch wheels in what Daimler calls a “chrome shadow finish.” The curving "ZEPPELIN" letteres were stamped below the distinctive double "M" emblem on the radiator grille and on the trunk lid. The taillights were darkened and, just to avoid confusion with other Maybachs on the road, the Zeppelin had four pipes instead of two, like the other versions.

The interior of the vehicle was enhanced, especially for the rear seats. A sterling silver plate
Inside, the Maybach Zeppelin had an optional system which sprayed one of two specifically developed Givaudan fragrances into the cabin. A silver plate with the vehicle number from the series was added to the interior. Maybach stated that the production will be limited to 100 units.

For the drivetrain, the 62 kept same twin-turbo engine mated to a 5-speed automatic gearbox, but with 28 more horsepower than the rest of the series. 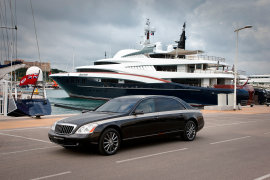 2 Is Your Wardrobe Missing a Pair of Water Buffalo Horn Shades? There They Are!