Despite having appeared one decade prior to the the Spohn-styled "Ponton", the cabrio had a slightly more balanced construction.

Based on the same pre-war chassis, the car was built in such a way o avoid any flaws such as the strange fender-wheel alignment seen on the Ponton. In this respect, the wide fenders and door sills were narrowed and the spare wheel side mount was relocated inside the car, right next to the engine, having been covered by a vented door. Engine access was made from above through a split gull-wing style hood while the rear end was elongated to match the size of the car's nose which accommodate the large 6-straight 3.8 L petrol unit. 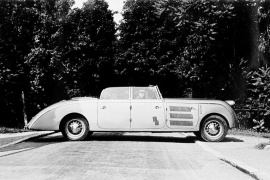