In 1929, Wilhelm Maybach passed away and left the carmaker without the main leader that the company needed.

His son, Karl Maybach, tried to pick up the pace and prevent the brand from crumbling to the ground.

One of its first ideas was creating the W6 lineup, which mixed a new platform and the old inline-six engines. Moreover, the carmaker thought about developing a sportier version of the big car, addressed to the younger generation that emerged even wealthier after the world economic crisis in the early '30s. Thus, Karl Maybach introduced the W6 Sport Cabriolet. A model that was not as successful as he hoped for.

The car's front fascia resembled the same design language as its bigger, more luxurious siblings. It sported a front bumper attached to the chassis' endings in front of the front wheels. The pushed-back vertical radiator was partially protected by a curved cross-beam that also supported the headlights, and it was attached to the front fenders. Unlike the big sedans, the W6 Sport-Cabriolet featured a smaller, slightly tilted windscreen. There were only two rear-hinged doors. The retractable soft top couldn't be left at home and was stored behind the cockpit. At the back, the curved, sloped-down rear end concealed the trunk.

Like any other Maybach, the car's interior was garnished with expensive leather and wood grains on the dashboard. This version of the W6 offered just two seats. Karl Maybach made the car for those who wanted a car for their passion, not especially for business meetings and authorities.

Under the hood, the carmaker placed the former seven-liter inline-six powerplant. The standard version featured a three-speed gearbox. Later on, the DSG version added a semi-automatic one, with a two-speed transfer case that raised the total number of available gears to six. 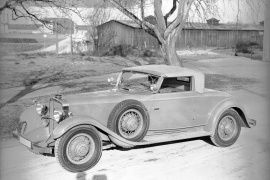