Is the Machiavelli Max the Most Convincing Ferrari Replica You've Ever Seen?

Mircea Panait
You probably know Rob Dahm from YouTube; he's a self-made rotary enthusiast who went from fixing computers to building an IT solutions empire. The car he’s running in the following video is the FD you’ve seen on his channel, a no-nonsense FD that serves as a testbed for Rob’s every rotary project.
9 photos

The first question that you may ask is, why doesn’t the RX-7 have a hood? Well, back in December, when he raced Ken Block’s Hoonicorn with his four-rotor turbo all-wheel-drive car, the hood came off on the very first race.

Moving on to what’s driving the street-legal drag radials of the hoodless car, this particular machine rocks a three-rotor mill and a Garrett G42-1450 spooly boy that produces boost creep. The reason for it boils down to the manifold, which was designed for a smaller turbocharger. Rated at 1,033 horsepower and 800 pound-feet (1,085 Nm) at the wheels, this incredible RX-7 also features 5.12 gearing for the Ford Explorer-sourced IRS rear end.

After breaking transmission after transmission, Rob has finally settled for a high-torque T56 Magnum six-speed manual rated from the factory at 700 pound-feet (950 Nm) in Super Magnum guise. Tipping the scales at just over 3,000 pounds (1,361 kilograms), the ultra-modded FD has to prove itself against a Ferrari 488 Pista with not a single go-faster mod.

Owned by Alex from TAG Motorsports of San Diego, the Italian thoroughbred rides on three-piece forged wheels from HRE that cost $1,400 per corner and 22-inch street rubber. Another notable upgrade comes in the form of Novitec aero that consists exclusively of carbon-fiber components.

On paper, Rob should have this one in the bag. However, in the real world, the RX-7 struggles to claw into the asphalt and spins the rear tires even in fourth gear. From a standstill to 1,000 feet and 1,500 feet, the Ferrari makes easy work of the Japanese interloper. Even in the roll race to 500 feet, Rob spins the rears once again, and the upshifts leave much to be desired in comparison to a dual-clutch tranny that was calibrated specifically for the 488 Pista. 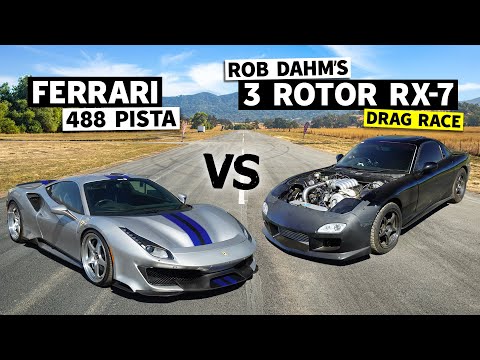