Is the fifth-generation Supra a true Supra? Contrary to popular belief, it sure is. The chassis, engine, gearbox, and many other bits and pieces may be shared with the Z4, but on the other hand, the BMW and Toyota engineers went their own ways rather early in the research & development process.
12 photos

That’s why the Supra feels different from the Z4, and that’s also why the Supra gets the aftermarket’s complete attention. Designed to corner like it’s on rails, the Japanese sports car with German roots is nothing to scoff at in a straight line for three reasons. First of all, the B58 straight-six engine is often mentioned in the same breath as the Toyota 2JZ and Nissan RB26.

We also have to remember that ZF Friedrichshafen still makes the best torque-converter automatic transmission in the business although Ford and a few other automakers have leveled up to ten speeds for the sake of improved fuel economy. The final reason is curb weight. At 3,304 pounds (1,499 kilograms) for the Supra in the following video, this fellow is way lighter than the AMG-ified E 53 Coupe on the other lane of the runway.

Not a true AMG because the powerplant is a mass-produced sixer instead of a hand-built eight, the German challenger tips the scales at 4,429 pounds (2,009 kilograms) according to the Stuttgart-based automaker. The Merc does have the upper hand in four respects, starting with the EQ Boost starter-generator unit that briefly adds a few horsepower and pound-feet.

We also have to remember that Mercedes runs a twin-turbo setup comprising of an exhaust gas turbocharger and an electric compressor that helps the exhaust gas-driven turbo spool up as quickly as possible. More powerful as well at 429 ponies and 384 pound-feet (520 Nm) compared to 382 horsepower and 369 pound-feet (500 Nm), the E 53 boasts 4Matic+.

First time on the blacktop, the Supra can’t help but eat the German coupe’s dust. The second run goes to the Toyota thanks to a much better launch, and both roll races conclude in the Supra’s favor. Better luck next time, E 53! 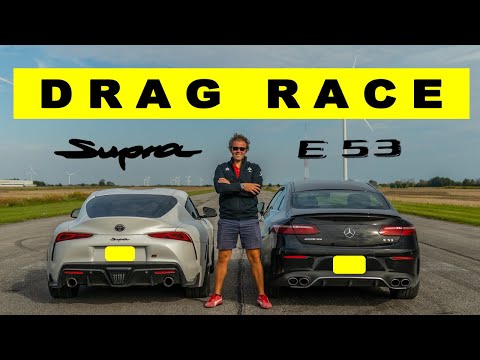