4 BMW 1000 RR Takes On a Suzuki Hayabusa and Kawasaki Ninja, Corvette Is a Piece of Cake

5 Hellcat-Swap 1964 Dodge 440 Drags Modern Muscle, Teaches All (but One) a Nitrous Lesson
Car video reviews:
Up Next

Custom Dodge Charger Could Make SUV Owners Jealous, if It Wasn't So Ridiculous

Often compared to the Toyota 2JZ and Nissan RB26 for its tunability, the BMW B58 has a performance-oriented sibling in the guise of the S58. Rather than the M3 sedan and M4 coupe, the German automaker from Munich premiered this motor in the X3 M and X4 M sport utility vehicles.
10 photos

But can we refer to these SUVs as bonafide performance utility vehicles? In a nutshell, yes! The X3 M in the featured clip is equipped with the Competition Package, which unlocks a few extra ponies from the straight-six engine. Priced at $7,000 over the standard model’s $70,100 price tag, this fellow produces 503 horsepower at 6,250 revolutions per minute and 442 pound-feet (600 Nm) between 2,600 and 5,600 revolutions per minute.

The pre-facelift model in the following video also tips the scales at 4,288 pounds (1,945 kilograms), and contrary to what’s listed on the screen, it does not feature a dual-clutch transmission. BMW uses the good ol’ ZF 8HP torque-converter automatic, matched to M xDrive all-wheel drive and the Active M Differential. The transfer case's electronically controlled multi-plate clutch distributes the engine’s resources fore and aft, as needed.

BMW quotes 4.0 seconds flat to 60 miles per hour (97 kilometers per hour), yet during instrumented testing, Car & Driver squeezed out 3.3 seconds with the first foot of rollout subtracted. It’s a seriously quick SUV, and over the quarter-mile, it also happens to be quicker than a Model 3 Performance.

From a roll, however, the smaller and lighter electric vehicle has the upper hand. Rated at 450 horsepower and 471 pound-feet (639 Nm), the Model 3 Performance weighs 4,037 pounds (1,831 kilograms) without the driver.

“We also did a warm-up test, and those runs were taken by the X3 M Competition,” explains Sam CarLegion. “But then, the roll was taken by the Tesla, sort of like a close one as the BMW was catching up at the end.” 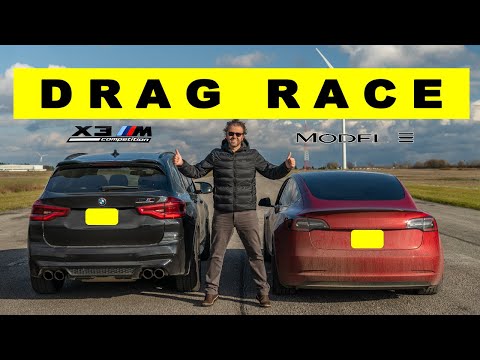