4 For Its Next Trick, This Crashed McLaren 720S Will Completely Vanish

1970 Chevrolet Chevelle Discovered After 43 Years in a Barn, It's a Holy-Grail LS6

Do you ever fantasize about winning the lottery and buying all the cool cars and bikes you've been dreaming of? It's at that point that you wouldn't have to choose between brands. You can get one Ferrari, one Lamborghini, one Porsche, one McLaren, and a few daily rides. Depending on big the jackpot is, you might even go further than that. But one thing's for sure, daydreaming about that supercar won't get you there.
15 photos

So, if you're on a quick break from work, you can get some additional motivation by watching this drag race. It's not the first time we're looking at a Lamborghini competing against a Porsche and a McLaren, but there are always new factors that can lead to different outcomes.

The three cars on the grid are the Aventador SVJ, 911 Turbo S, and 720S. The Lamborghini has the biggest engine here, but the 6.5-liter V12 is naturally aspirated as opposed to its competitors.

But there's more. The 720S can only count on its rear wheels for going forward, while the other two competitors both have AWD to work with. And you know what that means. The standing quarter-mile (402 meters) run is most likely going to be a two-way race, but things will probably be different for the rolling race.

After the first three runs, the results are crystal clear. The 911 Turbo S is still pretty much unbeatable to the finish line, as it secures a fast run of 10.4 seconds.

The Aventador SVJ is not that far behind, with a time of 10.6 seconds. The 720S finished last for every run, recording a time of 11 seconds. You can't help but wonder how things would have turned out if they had brought out the 765LT instead.

Alas, it gets its chance at payback with the rolling race format. As you would expect, both turbocharged cars are out in front. And we get to see a photo finish on the first run, but it's still the 911 Turbo S that takes the win.

Switching the cars to their sportiest settings, the three drivers will be going all out once they hit 50 mph in third gear. It's time for the McLaren to shine, as it lunges into the lead. With speeds going up to 150 mph (241 kph), the 720S wins its first run of the day. The half-mile challenge has the Lamborghini sitting in third, leaving the driver with almost no hope for the final test of the day.

Strangely enough, the McLaren 720S ends up with the longest stopping distance. The brakes on the Aventador SVJ deserve a special award for providing that much stopping power, and at the end of the day, each driver walks away with at least one small victory. 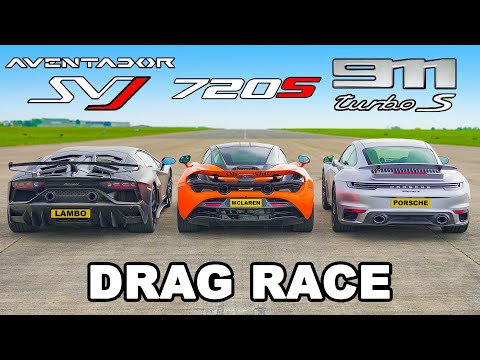