1970 didn’t bring too many styling changes to the Dodge Charger, though the R/T models did receive new taillight panels, as well as rear-facing scoops with dedicated logos that were now placed on the front doors, in a place where everybody could see them.
25 photos

Little was changed in terms of engine options in the entire lineup, and the most notable was the addition of a 440 Six Pack that developed 390 horsepower.

The 1970 Charger you’re looking at right here has already received a bunch of modern touches as part of a restoration process that also included a questionable paint job.

The Dodge was originally finished in green and came with an interior in the same color, but the owner somehow decided it’d be cooler in Panther Pink paired with a white vinyl top. The interior is now black, because you know, black is the new pink and pink is the new black anyway.

The owner says both the body and the paint are in excellent condition, though “there is some slight bubbling at the edge of the rear window.”

As for the engine, the 383 (6.2-liter) 2-barrel has been upgraded with a 4-barrel manifold and Edelbrock carburetor, and needless to say, it’s supposed to run like new. A video included in the eBay listing, and which you can watch below, provides us with a closer look at the car and confirms the engine indeed runs well.

According to the ad, the car has 63,000 miles (101,388 km) on the clock, and since we’re not being provided with any other specifics, we’ll just assume they’re all original.

As for the price of this pink muscle car, the Charger is listed on eBay with a $42,500 price tag. On the other hand, the owner has also enabled the “Make Offer” button, so you can reach out to them should you want a different deal.

For in-person inspections, the car is parked in Billings, Montana, and it comes with a clean title. 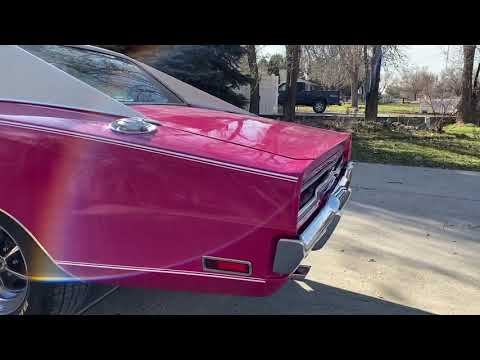