A lot has seemingly changed since the days when Mercedes-Benz had to rethink the original A-Class to avoid a spectacular overturn during the evasive maneuver test (a.k.a. the moose test). Actually, not so much when it comes to the actual trial, because the Swedish magazine Teknikens Värld continues to perform it, and some automobiles continue to fail it - sometimes spectacularly.
21 photos

Trillions of gallons of water have run under the proverbial bridge, and it seems that carmakers continue to forget that vehicles should be safer and safer with each passing iteration. Well, some of them are, while others... not so much.

And, besides the shock value of the now legendary (and feared) moose test, there’s still good reason to have automobiles go through it – the trial has been standardized according to ISO, and it can easily determine how a certain vehicle will be able to avoid a suddenly appearing obstacle.

The chances are slim that people will actually encounter a moose – but they grow exponentially when it comes to other cars, pedestrians, or, above all, children. That’s why Teknikens Värld continues to use the probe, and that’s why automakers should really care a lot more about its results.

Some do more than others, as revealed during the latest trial performed on the tarmac of Stockholm’s Bromma Airport. The video (embedded below) posted on the magazine's YouTube channel is very brief and concise, showing three modern plug-in hybrid vehicles – the Toyota RAV4 Plug-in Hybrid (RAV4 Prime in the U.S.), the popular Mitsubishi Outlander Plug-in Hybrid, and the Volvo XC40 T4 Recharge.

The truth is that none of them manages to pass the test, but the RAV4 apparently decided that being the quickest Toyota four-door (at least in America) was reason to become a Supra of some sorts. We’re saying this in the most ironical way because a family SUV should never ask its driver to counteract such a massive amount of oversteer.

The other two plug-in hybrids didn’t fare much better, but at least they were much easier to control at higher speeds, and that basically means they wouldn’t scare the bejesus out of everyone inside. 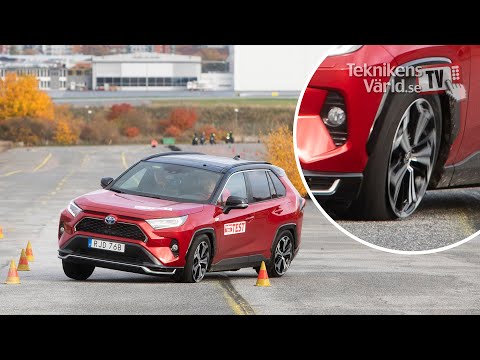