2 Billionaire Attorney Owns One of the World’s Largest Private Jets, a Gorgeous Boeing 767

YouTubers and influencers. Depending on who you ask, they’re either a waste of time and attention or people whose “work” matters because they speak to the masses on an equal footing. Unfortunately, regardless of where you stand, both generally tend to divide opinion.

This isn’t a debate on whether these modern types are good or bad, an online-based scourge or legit role models. To each their own, and all that: if Youtubers and influencers exist, it’s because some people want them to, for whatever reason.

Matthew Beem aims to be slightly different. He’s a 25-year-old Denver resident whose fame is mostly due to videos in which he makes oversize objects from household materials, whether it’s the Batmobile from cardboard, the world’s largest toilet, or a Minecraft sword. Every once in a while, he does challenge-type stuff, like surviving 50 hours in a porta-potty or in a moving truck.

His most recent challenge is one that anyone could have survived had they been able to afford it: Beem bought himself an Emirates A380 First Class Suite ticket for a flight from Los Angeles to Dubai. Though he calls it the world’s most expensive airplane ticket, that title is difficult to determine with accuracy since most airlines, including Emirates, apply dynamic pricing. Still, Beem tells Business Insider that, at the time he made the purchase, it was the most expensive plane ticket in the world.

An Emirates A380 First Class Suite ticket costs (or cost, at the time) $21,000, but Beem paid only $15,000 for it by choosing to not include insurance or flexible dates. His 15-hour trip to Dubai was not sponsored or in any other way endorsed by Emirates. With that in mind, here’s what it’s like for a regular, average-salaried person to experience what Emirates calls the closest thing to fly in your own private jet.

The Suite was introduced in 2017 as part of a major upgrade of Emirates’ Boeing 777 aircraft fleet, with styling and amenities inspired by the Mercedes-Benz S-Class. It’s a 40 square-foot (3.7 square-meter) space that you can close off with shutters, so you get your own cocoon. Available for long-haul flights, the experience includes gourmet dining, cinema-quality entertainment, a fold-out seat with zero-gravity position and with luxurious linen, access to a lounge, and a spa with shower and five-star amenities, so you can arrive at your destination “refreshed.” Poorer by $21,000, but refreshed.

Beem decided to give it a go, too. Granted, reviews of the Suite do exist and have been online since its debut, but this is perhaps the most relatable and, because of it, refreshing. If you want to live vicariously, the video below can certainly do it: like a normie, Beem gets overexcited at the number of charging outlets, the amount of legroom available, the many controls, and even the fact that there’s a minibar hidden away and accessible at the touch of a button. For comparison, his sister was “downstairs,” in coach.

Extras in the Emirates Suite include custom-made Bowers & Wilkins E1 headphones, which are included in the complimentary gift bag, along with a set of pajamas, slippers, custom luxury skincare Byredo kit, eye mask, and pillow mist, whatever that might be. The dining experience turned out to be as fabulous as promised, with a wide array of choices and an unlimited number of servings. Again, Beem is taken aback by the variety of bread served for a single course, which is something he’d never imagined on an airplane.

Also difficult to imagine on a plane is taking a shower. Beem does that in the morning after booking a spot at the spa, and he declares it even better than the shower he has at home. The bed, he says, was very comfortable, so he slept well through the night, despite the fact that he’s not a big fan of flying.

At the end of the flight, Beem concluded that the experience changed the way he viewed flying for good, which is probably the whole point of it. But was it worth the $21,000 $15,000 he supposedly paid out of pocket? Yes, it was, he says. 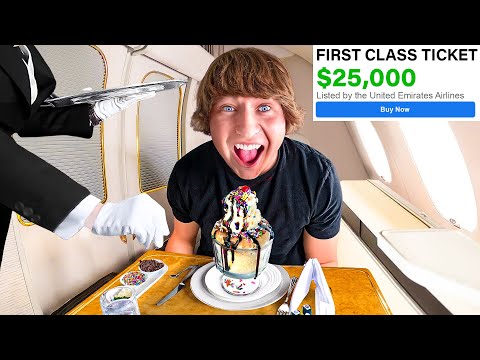 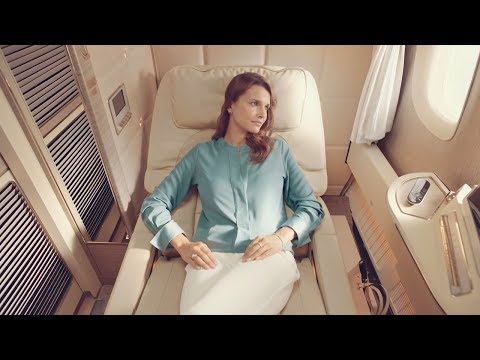 Editor's note: This article was not sponsored or supported by a third-party. Photos in the gallery are official Emirates promotional pictures.