3 Fabricator’s Private Collection Is a Treasure-Trove of Custom Trikes and Cars, For Sale

5 This Ordinary-Looking 2022 Mercedes-Benz S-Class Could Literally Save Your Life
Car video reviews:
Editorial

Learmousine, the Only Road-Legal Lear Jet Limousine, Is Still for Sale

Sometimes, even a private jet can feel too… basic. The Learmousine is designed specifically with those times in mind.
28 photos

The Learmousine is one of the most amazing and ridiculous frankenvehicles out there, a Lear Jet modified into a road-legal car. It’s not just any car, either: it’s a party limousine, decked with high-quality audio, light shows, and comfy couches where you can sip your glass of chilled Cristal knowing for a fact that no other multi-millionaire is able to top you in outrageousness.

The Learmousine is also for sale – still. Since its public debut in 2018, not a year goes by without it popping up at auctions, but Jalopnik is now reporting that it has now moved into storage with a Chicago Mitsubishi dealership, where it’s quietly waiting for its next owner. The asking price is $3.8 million ($3,799,999, to be more precise). Considering when it was introduced to the public, the owners said they expected people to pay as much as $5 million on it, you could see this as a solid deal.

The Learmousine is the work of Dan Harris and Frank DeAngelo and represents the culmination of 40,000 work hours spread over the course of 12 years. When they showed it off for the first time, they mentioned that it had cost $1 million to build, saying they regretted neither the money spent nor the time invested in the project because no one could brag about having a road-legal airplane-based limo.

Bragging rights were never enough to sell the thing, but it sure sounds like the duo is not letting that faze them. Whoever gets the 42-foot (12.8-meter) monster of a custom limo will be happy to know that it comes ready to party. It also delivers quite an impressive performance despite its size and weight, thanks to the 400 hp 8.1-liter Chevrolet Vortec V8 engine that can take it as fast as 100 mph (161 kph).

The rest of us poor folk or simply folk with enough common sense not to spend this much money on a custom vehicle that’s impractical and bonkers, have the option to rent it. Or to admire it from afar, which doesn’t cost any money. 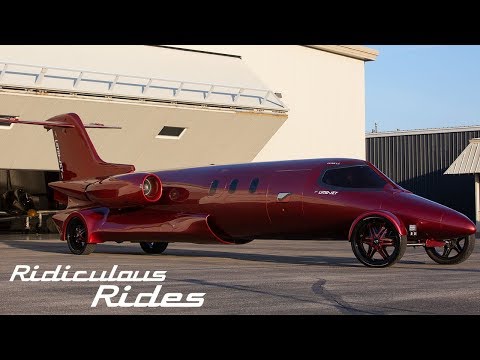