4 Zac Efron Is Living Out of a Lotus Hollywood Caravan, and It’s a Beast

A rich person’s definition of “camping” is as far removed from our take on the concept as possible. For these people, only a Prevost conversion will do and it has to be new.

Celebrities like Justin Bieber, Mariah Carey, Miranda Lambert, and Christina Aguilera have all experienced the same feeling of longing as us common folk throughout 2020 when travel restrictions made holidays abroad impossible. They all turned to Prevost conversions as a means to trek across the United States and get a proper vacation.

Landyachts or Class A RVs usually sell upwards of $2 million when new, not counting the kind of customizations celebrities would ask for. That $2 million price tag is for us common folk. As with everything else, prices on these vehicles go down if you buy them used, and it is definitely the case with this 2007 Prevost Featherlite H3 45 that’s selling out of Florida for a hair under $500,000.

Bear with us even if you’re not on the market for a tour bus. After all, not everyone has or is even willing to entertain the thought of spending half a million dollars on a motorhome that would only see the open road once a year. Just ask Dax Shepard; he knows all about buying a massive motorhome and then turning it into a man cave in his driveway because it does “like 7 miles a gallon.”

But this thing is a beauty. Andrew Steel of RVing with Andrew Steele got to check it out in person at The MotorCoach Store in Florida, and the video below includes the in-person tour and a test drive. When they say pictures don’t do a thing justice, this is what they mean.

Of course, this landyacht is huge, so that’s not the most surprising part. Neither is the fact that it’s flush in fake carbon fiber finishes, glass, mirrors, and marble, all of which help to heighten the impression of being inside a five-star hotel suite and not a home on wheels. The most surprising part is that it packs a hidden (secret, if you will) in the basement, accessible both from the inside and through the lateral hatch.

Basically, one of the cargo bays was turned into a bunk bed area that could easily sleep an adult with room to spare, or two children. A couple of TVs are thrown in for good measure, to make sure neither kid was left dissatisfied with the other’s choice.

Upstairs is a lavish kitchen and dining area, a smaller bathroom midway, a master bedroom and another, full bath of the kind that would make your non-moving house jealous. This is a slide-out bus, so you get even more space when it’s expanded. The amount of storage room, the excellent quality of the finishes, and the sheer excess of everything onboard make this the perfect motorhome for a millionaire who doesn’t mind a good bargain. And really, who does?

Steele describes this as the perfect motorhome for a family with kids, but the idea is almost laughable. Whoever buys this would be filthy rich, and it’s hard to imagine children from such a well-off family would willingly sleep in that hidden bunk area.

That aside, other amenities include a sit-down, spa-like shower and separate dry bath, a wall-mounted cabinet with custom glasses, a washing machine and dryer, and impeccable use of all available space for storage. In keeping with the outrageous feel of the entire motorhome, there’s a TV in one of the storage bays, for when you want to spend time outdoors but find nature way too boring. The full-length awning will protect you from the elements in this case.

Again, this 515-hp landyacht might not be to everyone’s liking, and it’s definitely not most people’s idea of camping or experiencing nature in person. What it is is a study in pure excess under the pretension of outdoor vacations. But there’s no harm in window shopping, is there. 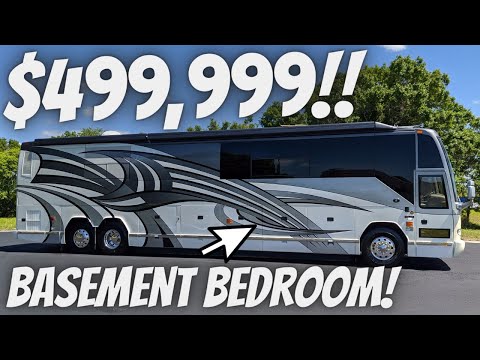