1 Here’s How Uriel, Justin Bieber’s Floating Rolls-Royce, Was Made

1960 Chevy Impala Barn Find Belonged to the Mafia, Has a Gun Holster in the Seat

Like many of us, pop star Justin Bieber and his wife Hailey Bieber also got into road traveling when the health crisis started in early 2020. Unlike most of us, they’re doing it in style, with a custom Prevost Marathon Coach RV.
14 photos

Bieber had the luxury motorhome custom-done for him in preparation for an upcoming tour to serve as a tour bus for himself and a small entourage. He ended up canceling the tour altogether when restrictions became the norm with the health crisis. At first, he and Hailey spent some time in Canada but, upon returning to the U.S., they dusted off the RV and gave it another use: their own vehicle for local travels.

Since then, they’ve been across the country in the luxury RV. As it turns out, they’re also using it for more business-like appearances, such as a scheduled visit at the California State Prison of L.A. County. TMZ has it from the California Department of Corrections and Rehabilitation that the visit was part of a faith-based support program, which means Bieber was there to spread the gospel.

Bieber is a born-again Christian and a high-profile member of the evangelical Christian organization Churchome and, until recently, the megachurch group Hillsong. It looks like he’s using his platform to spread the word to others who might need some guidance from above during difficult times.

Whichever his goal, his choice for transportation remains a solid one. His Prevost RV is a custom-built unit, presumably a Prevost Bus Conversion that sells for anything between $1.5 million and $2.7 million for regular people (read: people who don’t make A-list, celebrity-crazy demands). Prevost is a leader of luxury RVs conversions, offering standard luxury amenities like heated floors, sauna, real-size salons with fireplace, as well as luxe materials for finishes, like precious wood and marble. It also brings an abundance of flatscreen TVs, a sewer system, and everything you need to make it your home wherever you are.

The video below shows Bieber’s RV pulling out last summer, heading for a vacation in Utah. 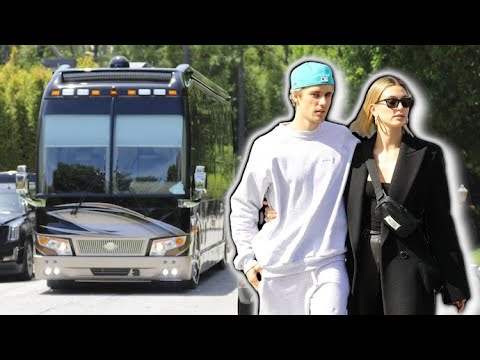 Editor's note: The gallery includes photos of 2021 Marathon Coach #1322 off the inventory list from Marathon Coach, showing a hint of the kind of amenities inside Bieber's own custom unit.