2 Forgotten by Many, the Toyota 1GZ-FE Was Japan’s First and Only Mass-Produced V12

While many enthusiasts choose to customize their beloved cars, only a few dare to spend a lot of time and money to transform a plebian minivan into a stunner. One of these people is South African James Redelinghuys, who woke up one day and decided that he needs a Lamborghini Aventador-looking, V12-powered Toyota Quantum taxi in his life.

The Story of the Lambo-Inspired Toyota Minivan With a Mid-Mounted, Twin-Turbo V12

Introduced in Japan as the HiAce more than fifty years ago and still in production six generations later, this versatile little vehicle was only sold in select Asian markets, some European countries, and of course, South Africa, where it is known as the Quantum. Available in several configurations, its minivan (or minibus, as it is called there) version is among the country’s most widely used cabs.

One of the companies that own a fleet of Quantum taxis and rentals is owned by James Redelinghuys, a man who also happens to love building wild custom rides. He’s known locally for embarking on jaw-dropping projects now and again, like an ItalJet Dragster that was transformed into one of the fastest scooters on the planet.

Looking for a way to promote his taxi and rental business, James turned his attention to the boxy, fifth-generation Quantum. Initially, the plan was pretty straightforward: fit a huge turbo on the stock 2.7-liter, devise a bespoke interior, and finish everything off with a widebody kit.

With the help of his brother, who owns a Porsche restoration garage, he started working on this project in the early months of 2017, expecting to have the minivan ready in a couple of months. However, things took a turn towards the realms of insanity after James discovered a widebody on a Japanese website. Oozing Lamborghini Aventador vibes, the kit in question was so outrageous that he simply had to buy it.

Once all the components were shipped to South Africa, the brothers realized that the Lambo-themed minivan needed more power than what a turbocharged four-cylinder could provide, so they decided to go for the iconic 2JZ. More than capable of extreme performance if properly tuned, the engine was not very easy to source, and it came with only half the cylinders of a true Lamborghini unit. To solve both problems, James had a brilliant idea of buying a 1GZ-FE instead, and he was lucky enough to find a relatively cheap one in South Africa.

Toyota’s first (and only) mass-produced V12, this powerplant was conceived for the luxurious JDM Century with bombproof reliability and comfort in mind. Because of that, the 5.0-liter could only make a little under 300 hp in stock form, so a twin-turbo setup was devised.

During dyno testing, the initial engine was destroyed, and so was its replacement, but the third 1GZ-FE was eventually tuned to perfection. According to James, it now delivers up to 600 hp and 523 lb-ft (710 Nm) of torque using an octane booster.

The engine was linked to a TCI Streetfighter three-speed automatic and all that torque was diverted to the rear wheels through a limited-slip differential taken from a Mustang GT.

Three distinct suspension setups were tested, and, in the end, the Lambo Quantum uses leaf springs on all four corners, supported by a set of custom-built adjustable coilovers.

Another incredible feat of bespoke madness, the interior was also designed and fabricated from scratch for this unique minivan. Everything is upholstered in high-quality leather mixed with Alcantara. The hideous stock dash was replaced with a Dashtech Racepro, a unit shared with the Ariel Atom and complemented by an OMP race-spec steering wheel.

The minivan was completed several months ago, after four and a half years of painstaking work. Sitting on a set of metallic bronze Audi R8 wheels, it was finished in an authentic Lamborghini Diablo red, on top of which a four-layer xirallic coat was sprayed.

One of the wildest minivans you will ever see, this Lambo-inspired Toyota taxi earned a lot of media attention locally, but also worldwide. If you’re planning a trip to South Africa in the near future, you won’t be able to rest your feet on that monstrous V12 while being driven from the airport to your destination, but for only R1,295,000 ($85,362), you can buy this crazy ride, which is currently up for grabs on Facebook Marketplace.

You can learn more about the 600 hp Quantum in the Cars.co.za video below, originally posted on YouTube. 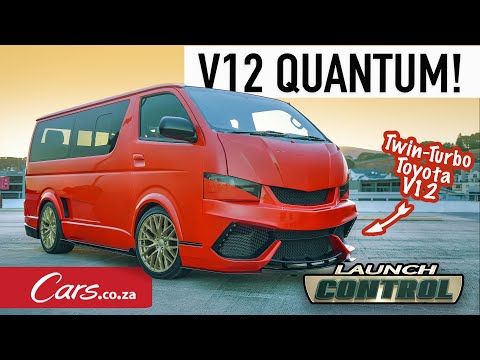