Daydreaming and everyday business don’t usually go hand in hand, but that’s where Lazzarini Design comes in to show it’s possible. Once more, the Italian design studio proposes a new take on the superyacht of tomorrow, one that disrupts established norms and invites flights of fancy.

The Shape Superyacht Concept Has Gaping Hole in the Superstructure, Plenty of Attitude

Lazzarini Design is synonymous with outrageous concepts, both in the naval and automotive industry, though at least one of them has been made real (the Jet Capsule). Founded by Pierpaolo Lazzarini, the studio has made somewhat of a habit out of showing what could be done if you simply threw the design book out the window and wrote your own. Its many projects remain in – and will probably always be confined to – the concept stage.

The Shape will probably adhere to that unwritten rule, though, in all fairness, it would be incredible if it became real some day. It is the latest superyacht concept, and it stands out from the rest from Lazzarini by avoiding unnecessarily elaborate design for a most striking silhouette and incredibly clean lines. The silhouette of the ship is so different and alien from traditional design that it is, at the end of the day, just a shape, like its name indicates.

As the headline states, The Shape features a large, gaping hole smack in the middle of the ship, where the superstructure would be. It’s an odd and visually striking design choice, one that serves no apparent purpose except for that of lookin’ pretty.

In architecture for instance, large holes placed centrally in towering structures have become more common in recent years. Whether they’re put there on feng-shui considerations, to allow spiritual or even real dragons a direct path to something else, or they serve practical purposes, like that of avoiding the “wall effect” of buildings, they’re here to stay. Almost in every case, they’re a sight to remember.

In naval design, such a choice would probably make little sense. After all, superyachts still have to weather storms and high seas, be efficient and speedy.

Maybe Lazzarini drew inspiration for The Shape from modern Chinese architecture, or maybe the studio wanted to create something that had not been done before, for the mere sake of doing it. One thing is for certain: whichever it is, they’re not saying, at least not right now. The Shape is offered with few details, which is the closest indication that there are no plans to take the project further than its current stage.

But we do know this: The Shape would have a length of 69 meters (226 feet), a draft of 3.90 meters (12.8 feet), and a beam of 9 meters (29.5 feet). The living area is situated aft, past the gaping hole in the superstructure, offering 35 meters (114.8 feet) of living space. There would be three decks, or floors, hidden in the superstructure, with suites on the first floor, shared living space on the second, and a command center on the third.

Because of the stylistic choice of placing a void inside the superstructure, space on The Shape is the real luxury. It makes sense, if you think about it: you’re not left with much deck space for stuff like cinemas, gyms, chef’s restaurants and nightclubs, if you chop up the ship down to half the size by making a circular hole into it.

That said, you still get a sizable helipad and at least four bodies of water. There would be three smaller pools on the aft decks, a generously-sized beach club, and perhaps the most striking pool envisioned in recent months, at the bow of the ship. It’s a glass-bottom pool, and people standing inside the hole – where a secondary, even larger beach club could be set up – would have the incredible view of the swimmers inside by simply looking up.

Propulsion is not specified, as neither is range or speed. Lazzarini imagines The Shape with solar panels on the sundeck – a most logical trade-in, when you already have two massive areas for sunning. So, it wouldn’t be far-fetched to assume this superyacht of the future would have hybrid propulsion, if not run entirely on clean energy.

If this is the future, it's very good-looking. 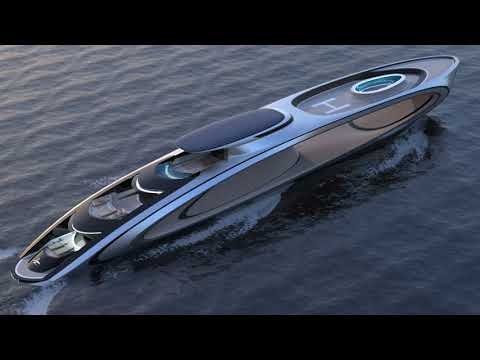