2 Prodigium, the Bonkers Shark-Shaped Megayacht That Puts All Others to Shame

3 Lazzarini’s Avanguardia, the Crazy Swan-Shaped Megayacht With Its Own Car Garage

4 Linux Modular Concept Can Travel by Water, on Land, on Snow and in the Air

5 Xenos Hyperyacht by Lazzarini Design, World’s Fastest Yacht in Its Class
Car video reviews:
Up Next

Solar-powered catamarans are not a novel idea, so this is not what Pierpaolo Lazzarini has in mind when he says he designed the Pagurus concept because the yachting industry needed to evolve. It’s something entirely different and perhaps slightly surprising.

Solar-Powered Catamaran Pagurus by Lazzarini Is Fast on Water, Fast on Land

Pagurus or Crabmaran is an amphibious catamaran, and it is this double functionality that makes it stand out from the crowd. It’s incredibly fast on water and decently-fast on land, on all types of terrain. Granted, it’s only a concept for the time being, but Pierpaolo Lazzarini of Lazzarini Design says anyone with enough money can have it built.

Of all the designers who occasionally indulge in futuristic renders, Lazzarini is perhaps one of the boldest. He takes inspiration from current trends and futuristic ideas to create vehicles that are better than modern counterparts, either in terms of performance or functionality. His designs are so incredibly out there that they almost beggar belief, but he maintains they can be done – with enough money and patience.

This is one of them. Should one billionaire come across looking for the luxury cat that could take him sailing across the world and then crawling beaches in search for his next on-land adventure, and more importantly, should he be flush with cash, Pagurus could be his for €24 million or $29.4 million at today’s exchange rate.

So let’s see what this kind of money buys, theoretically at least.

Pagurus is a 25-meter (82-foot) solar-powered hybrid catamaran that can accommodate a total of 8 guests and 4 crew members. Living spaces are available in the two side hulls, in two or three rooms on each side, with kitchen and bathrooms.

The hulls are connected through a bridge tower deck station that serves both as a wheelhouse and formal dining area. Because the floor here is actually a platform/crane that lowers onto the water, this space can also serve as tender garage, where the owner could keep at least a couple of Cybertrucks, a tender, or other types of vehicles, either for land or water exploration.

Made of steel and carbon fiber for propulsion on water, Pagurus has dual stern drive propellers paired with twin 890 hp diesel engines. Maximum speed on water would be of 24 knots and cruising speed of 18 knots, when traveling on diesel power. Electric motion maximum speed on water is of just 6 knots.

The cat has a total of six engines, two for water and four for land propulsion, with total power on board of 3,540 hp. In the immersed part of the vessel, the hulls are designed with recesses that house four steel cylinders, two on each side. Each cylinder is designed with “a helical spiral flange like the thread of a screw,” which generates water friction and recharges the batteries. The cylinders are connected to independent engines, allowing them to generate motion in water.

Once it reaches the shore, Pagurus lowers these rotating cylinders to the ground, and they help to carry it across all types of terrain. Powered by four Yanmar engines of 440 hp each for land movement, Pagurus can travel at speeds of 35 kph (21.7 mph) maximum and 20 kph (12.4 mph) for cruising. This isn’t incredibly fast, but it’s definitely several times faster than other types of amphibious watercraft. Electric motion maximum speed for land is 15 kph (9.3 mph).

Though this is a hybrid vessel, as the renders clearly show it covered in solar panels, Lazzarini doesn’t go into specifics in this respect. Neither does the project consider the damage those rotating cylinders would cause to any environment they’d come in contact with, which would definitely write off whatever benefits of hybrid propulsion.

Then again, this is just a concept, so perhaps over-analyzing it is unnecessary. But Lazzarini does say it could be built, albeit for an eye-watering amount of money. If we’re going to talk about the need for the naval industry to “evolve,” ripping up beaches is probably not a good idea. 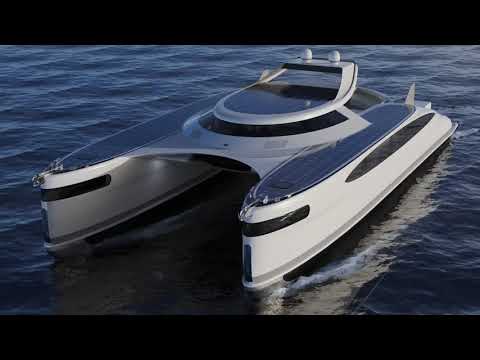