1 The Irony of Wales’ First Floating Hotel That Sank

2 Z-Triton by Zeltini, the Electric Tricycle-Boat-Home You Can Go Camping With

Every once in a while, videos of a strange boat that’s able to slowly crawl on dry land will pop up online, prompting amused reactions and bewilderment. Most often than not, they’re all Sealegs vessels.

Despite the apparent novelty factor, there’s nothing new or fad-like to Sealegs. The New Zealand-based boatmaker has been around since 2005 and has delivered amphibious boats to some 55 countries ever since. Sealegs is synonymous with amphibious boats and, at the same time, with the convenience of being able to bring your vessel on dry land without help from a second vehicle like a tractor or a trailer.

The latest from the builder is the 12m Cabin RIB, whereas “12m” stands for the total length of the vessel: 12 meters or 39.3 feet. It’s designed in partnership with Hall Marine and C4 Design.a

At this length, this Sealegs is the longest amphibious production boat in the world. To boot, it’s also very versatile in terms of use of all that space, being perfect for recreational purposes, for cargo hauling or tourism. It can even function as a tender for superyachts thanks to its size and amphibious quality, and the builder will see that it’s built according to your exact specifications.

This being a Sealegs boat, it uses the Sealegs System 100, which you can see in action in the video below. It consists of hydraulic wheels and motors built into the 37” tires for an all-wheel, all-terrain drive at speeds of up to 8 kph (5 mph) thanks to 94 hp of power. On land, this boat is able to climb 25% gradients.

Speed on land is clearly not the boat’s forte, but the goal is to get it out of the water and onto dry land, not to win any speeding contests. On water, though, it flies. For propulsion on water, the 12m Cabin RIB uses a pair of twin 400-hp outboard motors and can reach speeds of nearly 40 knots. You can also fit it with twin 300 hp outboard motors, if you wish. A massive 500-liter (132 gallons) fuel tank is hidden under the deck.

Because it’s not all about “the motion of the ocean,” the size of the boat is important. Sealegs says that this particular model can seat up to 12 people, including the driver, and comes with a customizable layout that renders it a suitable choice for a variety of purposes. For instance, in recreational configuration, it can seat nine people and comes with its own, fully-stocked galley and enclosed (or open) cabin with panoramic views. Your dream companion for new adventures at sea.

Other options include sleeping berths, spaces for dining or electric sunroof, air-conditioning and barbecue, and a wide array of arrangements for recreational spaces. A retractable boarding platform allows for easy and elegant boarding.

Tech on board includes GPS / Depth Sounder, radar and autopilot cruise control, and the heater and fridge are part of the standard offer.

Sealegs says the 12m Cabin RIB is “the largest, safest and most luxurious Sealegs ever produced” and offers “unparalleled space for an amphibious boat.” It’s not exactly top of the line if you compare it to other luxury boats, but those don’t travel on land like this one does. Given the customizable layout, it’s a solid option, but the fact that it can crawl on dry land adds plenty to its appeal.

Sealegs did not mention a price range for the base model, but expect it to be more expensive than similarly-sized, non-amphibious offers. Even used models sell for a lot of money on the specialized market, depending on configuration and size.

The first 12m Cabin RIB hull is now under construction, having being commissioned by a client in Europe. Sealegs estimates deliveries of more hulls will start in 2021, so expect more viral videos to pop up. 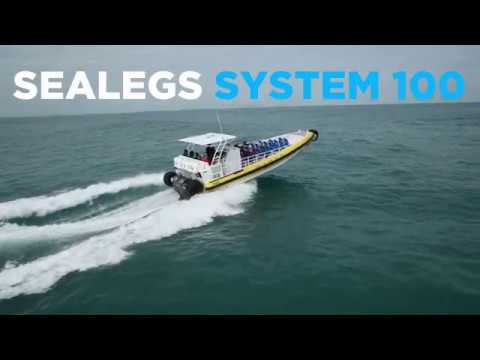