It’s been five years since Mad Max: Fury Road, the highly anticipated and long-overdue continuation in the Mad Max universe, dropped in theaters. While a sequel is still a long wait away, here’s a video into some of the troublesome hot rods in it to keep you going.

Mad Max is director George Miller’s franchise, which is why Fury Road was so slow in making its way to the big screen: he simply wouldn’t let studio bosses dictate the direction it could take. So Miller bid his time and waited until Warner Bros. was ready to spend a fortune and invest a lot of trust in him, so he could head to the deserts of Namibia to shoot what is, to this day, one of the most daring films ever made – and a real treat for car enthusiasts.

Another thing Miller is famous for is his desire to deliver real content: he wanted to use as little CGI as possible in post-editing, so he relied mostly on practical effects. What this means is that all stunts were real, whether they showed cars ramming into each other at great speeds or the War Boys hanging out of monstrous contraptions shouting “Witness me!”

He also insisted on actually building all the cars that appeared in the film and, according to a recent video from Mad Max Bible, many that never even made it on set. Production designer Colin Gibson oversaw all the builds.

In total, over 150 rat rods were built for Fury Road and only some 15 have survived the intense, extended shoot. Some never even made it to Namibia because they were literal deathtraps, some were flown from Australia to Namibia only to be deemed that on arrival and relegated to prop status. Others were used in production and went on to win a considerable chunk of the fanbase, but they were still terrible, unsafe or completely unreliable.

One such example is the Gigahorse, which is driven by Immortan Joe himself, with son Rictus as the rear passenger. The Gigahorse packs two Cadillac Coupe DeVilles on top of each other, sitting on a custom chassis with 70-inch (178 cm) rear tractor tires on custom rims. It was actually powered by a massive V16, thanks to twin Chevrolet 502Cid Big Block V8s with twin superchargers, generating 1,200 hp.

Gibson claimed top speed of this thing was of about 125 kph (77 mph) but in reality, it never went faster than 95 kph (60 mph). Some studio trickery was needed to make it look as if it was way faster than it was in reality.

The problem with the Gigahorse was that, when it arrived in Namibia, it became apparent that the original TH400 gearbox needed to be rebuilt after each shot. The Fury Road mechanics had to rush to fix the issue before the 10-ton vehicle was allowed on set.

The only hot rod that wasn’t built specifically for Fury Road was Cranky Frank. It was already pretty famous back home in Australia when producers contracted the builders, and it was a neat addition to the family because of its unique looks.

Build with the body of a Holden FX / FJ Utility and a Chevrolet V8 283CI engine with supercharger, Cranky Frank was one of the 15 lucky vehicles to have survived the shoot. This was no mere coincidence, either. This hot rod was such a nightmare to be driven that no stuntman would come near it: you could only drive it blind, because the driver’s seat was in the center and the only view through the narrowed windshield was that of the supercharger.

The Peacemaker was the Bullet Farmer’s vehicle of choice. It was a neat, tracked monster of a car that boasted plenty of military embellishments, in addition to the tracks, and even parts from a Cessna plane. Based on the EV1 Ripsaw of the U.S. Army but otherwise an original concept, as soon as it arrived in Namibia, it revealed itself as being more trouble than it was worth. The build had been rushed (half-baked, more like it), with incomplete welds and improper cooling, among others. As a result, it suffered many mechanical failures during production.

The mechanics on set made sure to keep it going for the entire duration of the shoot, and were among those who cheered when it was crushed to pieces at the end of it.

The Gigglehorse (Lysdexia) was among the vehicles that didn’t even make it in the film. Build with a Chevy 1934 body, on a buggy chassis and with a motorbike engine installed backwards, it kept rolling over. It was never allowed on set for this very reason.

The same goes for Moon Buggy (Boneyard Mongrel), a loaner that had been added a Holden HT Kingswood sedan body, specifically for the film. With a Subaru WRX Turbo Injected motor, it supposedly came with homemade wheel frames with worn-out motorbike tires, was difficult to get into and out of. It was deemed a deathtrap on wheels and wasn’t even shipped to Namibia, so it made its way back to its original owner.

Mad Max: Fury Road is an extraordinary film that does a lot of things, but to car enthusiasts, it delivers awesome automotive, if post-apocalyptic, content. Aside from its feminist, egalitarian message and its filmmaking merits, it shows a good, proper look at the culture of hot rods. 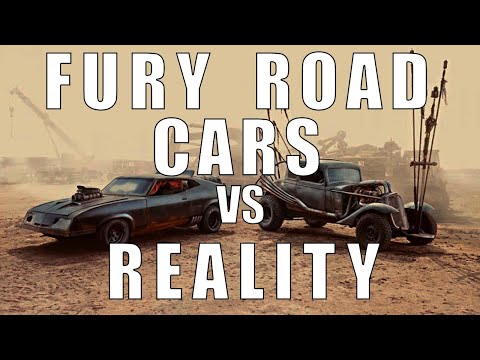