3 After Alpha5, DeLorean Might Present Alpha2, Alpha3, and Alpha4

4 DeLorean Presents the Alpha5, the EVolved Halo Car of the Company

5 The DeLorean EVolved Taillights Will Look Like This
Car video reviews:
Editorial

The DeLorean Motor Company is back in business, though not on a large production scale that would make future models affordable to regular folk. If you thought you could get a better deal on a DeLorean if you skimped on a wheel, you’re out of luck.
9 photos

The three-wheel DeLorean is officially dead.

That said, the three-wheel DeLorean should not have been “alive” in the first place since it was not an official DMC product.

It was a three-wheel DeLorean built and sold by a certain Tyler DeLorean from Newquay, Cornwall, UK, who claimed to be DeLorean’s illegitimate son on a mission to revive the DeLorean brand with a car that stayed true to the iconic model and came with an affordable price tag. He called it the DeLorean DMC-21 – “21” because it was “the future.”

In reality, Tyler DeLorean is Benjamin Granger, a man who had been trying to sell these modified three-wheelers for a couple of years now, under the pretense of being DeLorean’s love child. As expected, he got sued by DMC for copyright infringement and passing off. His “creation” might have been a three-wheel Reliant Rialto (so legally a tricycle) in disguise, but it featured trademark elements from the DMC-12 and plenty of DMC badging.

The High Court’s intellectual property court ruled in favor of the carmaker, finding Granger guilty on both counts, The Sun reports. He now has 14 days to pay legal fees of £20,000 (approximately $24,100 at the current exchange rate), which, incidentally, is exactly how much he planned on charging for a single Rialto-disguised-as-DeLorean. He is now facing “ruin” since he doesn’t have this kind of money.

Granger believes that the court showed no sense of humor in the ruling. “How could anyone confuse a real DeLorean for mine? It’s missing a bloody wheel,” he tells The Sun, which generously dubs him an “inventor.” “I wanted to inspire people to create something amazing and use their artistic expression. At every motor show I’ve been to, people have told me it’s hilarious.”

In previous statements, Granger kept saying that he was only carrying out his father’s dream and that he was convinced he’d win the court battle. He continued selling and advertising the three-wheeler even after the lawsuit, even saying at one point that he was in talks with the Taliban to sell them hundreds of units. So much for that.

While Granger is trying to get the cash to cover the legal costs, the saying “we’ll always have Paris” comes to mind – with “Paris” being, in this case, Granger’s fabulous fashion and the ridiculous DeLorean copy. 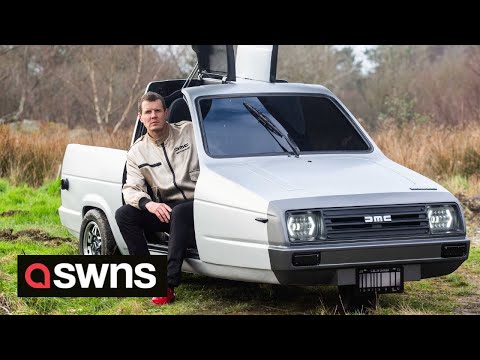