Sure, you know it.

The famous Steven Spielberg’s “Back to the Future” trilogy made it to be recognized all around the world. Of course, it was not a home-made time machine, but a sports car manufactured by the DeLorean Motor Company between 1981 and 1983 in Ireland.

Despite its look that gave the impression of a powerful car, it actually lacked power and overall performance. And it was not a cheap car!

The DMC-12 had the famous gullwing doors, borrowed from the Mercedes 300 SL. It was equipped with a rear-mounted engine rated at 130 hp (a 2.85-liter V6) and a torque of 153 lb.-ft. The engine was developed by the Peugeot-Renault-Volvo company, as well as the 5-speed manual transmission.

The DeLorean could sprint from 0 to 97 kph in 8.8 seconds with the manual transmission and in 10.5 seconds with the automatic gearbox. The car’s top speed was rated at 175 km/h. Doesn’t sound like a performant sports car, right?

The first produced models suffered from mechanical issues as well as poor build quality. The units needed hundreds of hours of work before being shipped to the dealers for deliveries. The issues were resolved by 1982. 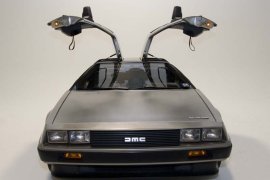 2 After Alpha5, DeLorean Might Present Alpha2, Alpha3, and Alpha4

3 DeLorean Presents the Alpha5, the EVolved Halo Car of the Company

5 DeLorean Releases a New Teaser of the EVolved, Its New Electric Concept Car