1 The Colim Detachable Camper Dreams of a Bright, Compact and Mobile Future

2 The Very Tiny and Cute Golden Gate Is Part Camper, Part Bicycle, and All Fun

4 QTvan Is World’s Smallest Trailer Towable by Bicycle, Still Has TV and Minibar

5 The Ultimate Camper Is a Luxurious Compact Teardrop Trailer With Two Kitchens
Car video reviews:
Up Next

For those days when you feel like everything is fire and brimstone, a word of (unsolicited) advice: look hard enough and you’re bound to find dozens of amazing things to surprise you in the most pleasant way. The Beermoth is just one of them and, as it so happens, it’s also automotive-related, so we can all take a trip down memory lane together.

A motorized vehicle is more than just a means to get from one point to another in a speedy manner, in comfort and without great expense. A motorized vehicle, be it a car, a motorcycle, an RV, or whatever else you can think of, can tell stories, enable experiences and become a part of them. Say what you will about pollution and climate change and the part the automotive industry has played here, but a motorized vehicle is a perfect way to reconnect with nature. (We just need to be more responsible about it.)

The Beermoth is just that, while also standing out as the perfect example of creative recycling, and of how a vehicle can become something else at the end of its lifecycle. You don’t have to look hard to find examples of striking and surprising motorhomes, and it’s not surprising. After all, what can be more amazing than a reliable vehicle that’s also a reliable home on the road?

This motorhome won’t see any road soon, and it hasn’t in years. But that doesn’t mean it’s any less impressive. Based on a 1956 Commer Q4 fire truck, it can sleep two adults and provides the basics for a comfortable stay at camp. It’s rustic-looking and has a certain gypsy vibe to it, and that’s mostly because it’s made up of stuff you’d normally discard in the garbage. It’s a glamping unit, and you will find it in Scotland, if you’re ever at Inshriach House, in the Cairngorms National Park.

Inshriach House is a name that’s made headlines in the past in the British media. In 2015, it earned owner and builder Walter Micklethwait the much-coveted title of Shed of the Year. Prior to that, Walter bought a decommissioned fire truck and built it into what is one of the most creative hotel rooms.

Walter does do that a lot. He says the thing that caught his eye with the former military fire engine was the possibility of turning it into a hotel unit and “adding to the stable of oddball holiday options” he was already offering. It’s been doing just that since 2011, and it looks as awesome today as it did back then.

In February 2010, Walter bought the ‘56 ex-military fire truck from the Manston Fire Museum in Kent, South East England. He once described driving it home to Scotland “slow and woefully fuel consumptive,” and presumably he hasn’t driven it since. He also said that, once the rebuild was done, the fire truck was towed into the fields with a tractor.

The roof of the rear section was raised by one foot (30.5 cm) and a new canvas was put in. Unlike most hotel rooms, the Beermoth doesn’t have walls, relying on the original wooden sides of the truck and the canvas for protection against the elements and the cold. Walter did put in a small rear wooden wall, salvaged from one of the doghouses, and a door from one of the cottages at the farm.

Inside, the Beermoth is comfortable but in a very rustic, almost spartan way. Still charming and cozy, but comparatively rough. And with plenty of personality. The floor is real oak parquet from a Tudor mansion, a snooker table slate was turned into a hearth (which was later replaced with a steel wood-burner), the bed is Victorian (but with a new mattress), and the furniture is mismatched but inviting. Access is done by means of a repurposed fire escape. There’s a real ‘50s sink to wash up and do the dishes, a burner for some light meal-prep, a table for two, extra seating on a wooden bench and an armchair, cabinetry for cutlery and enameled everything, a hamper, a coffee maker and tin opener.

The unique motorhome (if we can still call it that, since it doesn’t move anymore) is pet-friendly but not suitable for kids. Adults can book it by the night, and there’s a sauna and a river for fishing nearby, as well as Walter’s gin distillery, housed in the same Shed of the Year. Bathroom facilities are on site, so no, you won’t have to go in a bucket.

As for the name of Beermoth, your guess is as good as ours. It could be some sort of play on “behemoth.” A “beer moth” may refer to the drunk who goes around all the tables to finish off the drinks of other guests, and given the presence of a gin distillery on site, there could some connection between the two. Even this ambiguity adds to the charm of the place, but you don’t have to take our word for it. 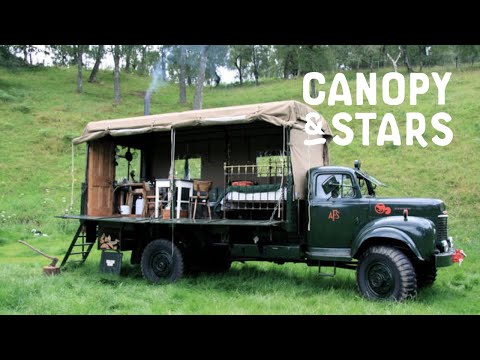