1 QTvan Is World’s Smallest Trailer Towable by Bicycle, Still Has TV and Minibar

4 The Little Camper That Could: Stella Vita Completes Extended Trip on Solar Power Only

5 Dailycamper Gets the Most Out of the Fiat Doblo, Is Also Great for Daily Use in the City
Car video reviews:
Driven

What’s tiny and motorized but is neither car nor bicycle, but functions as a camper? That sounds like the intro to a probably unfunny joke, but the answer is a real thing, perhaps one of the strangest small campers to have even seen the light of day: the Golden Gate camper.

The Very Tiny and Cute Golden Gate Is Part Camper, Part Bicycle, and All Fun

With campers, trailers, motorhomes or any other type of RV, the rule of thumb is usually “the bigger the better.” You want a larger footprint in order to accommodate the creature comforts you’re used to, which, in turn, would make any camping or glamping experience worth the trouble. But what if your expectations are at the opposite end, and you want the mere basics and a shelter for short-term stays?

Of course, you could always get a tent, but that would still imply relying on a means of transportation to get to where you’d want to be. In a bid to curb reliance on cars, an artist created the Golden Gate camper we’ll be looking at today.

The Golden Gate camper is a 2012 invention that, to this day, lives up to the (unofficial) title of one of the world’s most creative tiny campers. It was so popular at the time, it even got a “sequel,” in the form of the sturdier-looking, higher quality Golden Gate 2.

Jay Nelson is the artist in question, and he’s made a reputation for himself by putting beds in almost every vehicle. It could be a car, a boat, a golf cart, a moped, or a quadricycle, but if Nelson has had his way with it, you can count on the fact that it’s now a camper. His projects range from tiny (and slightly ridiculous) to downright spectacular, tiny homes on top of salvaged vehicles.

The Golden Gate project was started as an idea for something that would get him (or anyone else not afraid of looking silly riding in this thing) around San Francisco. Built entirely in his driveway, the Golden Gate pod was initially pedal-powered, but Nelson put in an electric motor when he saw for himself what an ordeal it was to take it uphill.

At the end of three months of work, using materials you could find at any hardware store, the pod was done: it was 8 feet long, 4.5 feet wide and 5 feet tall, and drew power from an electric motor that moved the rear wheels. Riding on bike wheels, the pod was cut out of a sheet of plywood, with a plywood frame clad in two layers of fiberglass. It has one swinging door for access, with windows on all sides to allow natural light in.

Technically a bicycle, the pod is operated via a steering wheel that is also made of wood, and has a special space to place a phone in case you need to use the GPS. The cabin is tiny, but surprisingly accommodating due to the rounded shape: you have a bed that could easily fit two slimmer people or one person in maximum comfort, a “kitchen” at the rear, and plenty of storage under the mattress. You also get a wooden rack on top, which is just perfect to carry two surfboards.

The “kitchen” has a stove and a sink with hand-pump, connected to a small water tank. The sink drains directly into the street, but the worst part of it is, according to Nelson, that you can also use it as a toilet and pee in it. If you’re averse to the idea of peeing in the sink and having it go down into the street, you can always use a tiny bucket hidden under the mattress. For this project, Nelson also created a special suitcase that holds both clothing apparel and his art supplies.

Top speed of the Golden Gate camper is 20 mph (32 kph), “especially when going downhill,” Nelson said in an interview at the time. Not that anyone would want to go any faster in this. Nelson initially estimated range at 10 miles (16 km) per charge, but he found out that it’s more like 7 miles (11 km), which, he said, was more than enough to get “where you need [in San Francisco] and back.”

“It’s better than a car,” he said of the hybrid pod at the time, explaining how he’d been using for daylong getaways and always experienced the same level of satisfaction. Golden Gate 2 camper, which he introduced later, following the success of the original, is more like a tiny house on (bicycle) wheels. It uses higher-quality materials and seems overall sturdier and more polished. You will find photos of it in the gallery above.

It’s unlikely tiny campers of this type will ever catch on, for the obvious reasons. They’re not comfortable, they’re slow and they’re unsafe in traffic, to name just some of the things wrong with them. But they do prove that options exist, and that a lot of fun can be had with the tiniest thing, as long as you’re willing to try it. 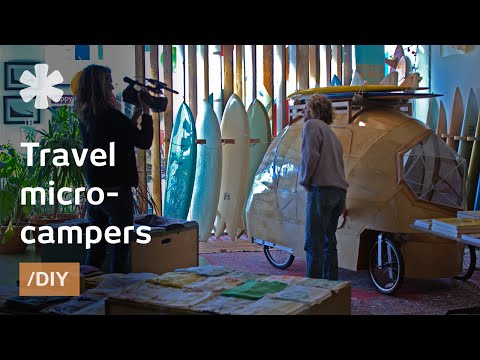