1 Bash, the Luxury Yacht on Which Princess Diana Spent Her Final Summer, Is for Sale

Space exploration and robotics have always worked hand in hand, and over the years, the collision between the two fields gave birth to some incredible machines. On that list, the Robonaut, a humanoid piece of equipment designed to do things in space just as a human would.
7 photos

Having been made in two versions, Robonauts were put together by the Dexterous Robotics Laboratory at NASA’s Lyndon B. Johnson Space Center, with some help from General Motors. The team behind Robonaut 2 included Nic Radford, who was deputy project manager and chief engineer for the project.

Radford now heads a company called Nauticus Robotics, which includes an additional 20 people who worked on the Robonaut. Together, they are working on a machine meant for use in an entirely different environment than outer space: the deep blue sea.

This week, NASA revealed some of the details of a shape-shifting robot called Aquanaut, currently being put together by Nauticus. The idea behind coming up with such a machine is to “cut costs for maritime industries.”

Now, remote-controlled underwater robots are not unheard of in the maritime industries, but what sets the Aquanaut apart is the fact it can be operated without the need of a cord to connect it to its remote operator.

By eliminating the cord, Aquanaut also removes the need for a support vessel floating nearby, and that, in turn, could help cut costs with crew (some $100,000, the team estimates), but also remove potentially 70 metric tons of greenhouse gas emissions that the support vessel would have released into the atmosphere each day.

Aquanaut is the size of a sports car, and it’s fully electric. Its shape-shifting capabilities can best be noticed when it reaches its destination and the shell opens, the arms start moving, and the nose flips to reveal the wealth of instruments (cameras, sensors, and specialized tools needed to complete a mission) it is equipped with.

Aquanaut was first tested at the Johnson Space Center back in 2019. At the time of writing, two of them are around, and Nauticus plans another 20 to be made over the next three years. They will not be sold to interested parties, but used to “provide affordable services.”

The list of operations this robot can aid with include port management, subsea cable maintenance, offshore mining, and, of course, defense applications. Aiding it on assignments will be a support boat called Hydronaut that can also be operated remotely. 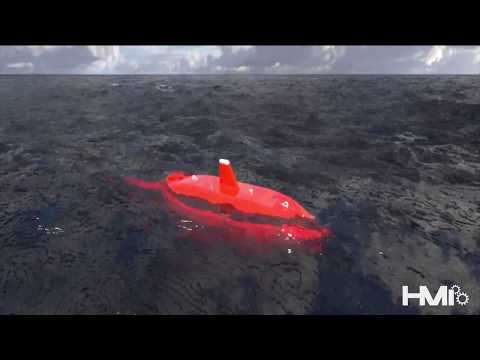