There are enough guides that teach us how to survive when stranded on an island, in the desert, or on the sea because these unfortunate events have happened and those who survived shared their experiences with the world.

However, when it comes to being stranded on an alien planet, the number of reliable survival guides can be reduced to zero. We are probably very far from interstellar travel, let alone colonizing new planets, so putting together a documented survival guide for those stranded on alien planets is not possible and, truth be told, doesn’t make sense.

However, if we’re talking about games, then everything goes. Stranded: Alien Dawn is a third-person, open-world game that focuses on survival and build aspects. There is no flying spacecraft in the game, but there are wrecks of spaceships that can be salvaged for much-needed materials.

Stranded: Alien Dawn doesn’t have a final goal beyond just trying to survive. Unlike an actual stranded person, you get to choose the crash location and the people you’d like to oversee on the alien planet. At launch, the game had only a few options available, but the latest update, Dunes and Moons, introduces a new biome, Desertum, and three new moons – Jason, Nyx, and Chaos.

More importantly, the game introduces two new difficulty levels for those who eat these types of games for breakfast: Very Hard and Insane. Also, for those who’d rather “survive in peace,” a new game rule has been added, “Peace first,” which will prevent wild animals from attacking your colonists.

I’m expecting the number of game rules and biomes to further increase as the game nears full release. Being able to customize your gameplay experience the way you want comes a long way, not just for newcomers to the genre, but more importantly for hardcore fans.

That said, each “survivor” in Stranded: Alien Dawn comes with their skills. They even have biographies and personalities that will influence how they react in various scenarios when stranded on an alien planet. For my first adventure on the Jason moon, I picked Sora Satoh, a new survivor trained to survive in the harshest deserts, because I wanted to try out the new Desertum biome.

The rest of my team consists of an exquisite cook, an explorer, and an engineer. Not long after my spaceship crashed on the moon, a fifth survivor joined who was very good with… tailoring. Despite all survivors being specifically good at certain things, you can order any of them to do any of the chores required to survive. Cutting wood, mining stone, scavenging spaceship debris, constructing, researching, observing, or even hunting are all activities required to build a healthy colony.

Since this is a sandbox experience, you’re not going to get any handholding, so you’ll have to decide on both short- and long-term if you want your survivors to succeed. For example, although you start with a fairly healthy amount of food rations, they run out extremely fast. That’s one of the big issues that I ran into during my first playthrough.

Even though you can hunt and cook, the number of rations you can make per day is fairly small compared to what you need. There are multiple solutions to this issue and one of them, and the easiest to achieve, is to have one person make enough rations to get you through the day. Thanks to an in-depth activity manager, it’s possible to micro-manage each survivor to make your colony as efficient as possible. For example, you can forbid them to do certain activities like cutting, mining, or researching to focus on what they’re specialized in.

Research and observing the local flora and fauna are just as important as building shelters for your survivors and keeping them warm, well-fed, and happy (yes, they can have meltdowns). Growing crops should be the next important thing on your to-do list after discovering edible plants/vegetables, since many of the survivors are… vegetarians and will not eat meat.
Conclusion
Stranded: Alien Dawn is more than just a survival guide for those stranded on alien planets. It teaches players to plan ahead when building up a colony, as well as make decisions on a whim based on the situation on the field.

Be prepared to fail a lot in the beginning until you find the right path to a strong, sustainable colony. Deciding to hunt for one more season instead of growing crops can lead to an unfortunate end for your survivors, but it can also mean you have more time for research, construction, and other equally important activities. It’s why I love this game so much: it prepares you for the unknown. 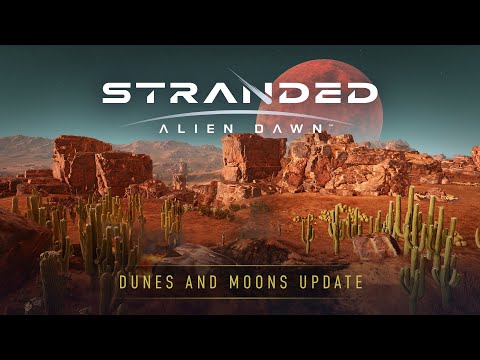 Editor's note: Preview key was provided by the publisher.