5 Ultra-Rare, High-Performance 1958 TG 500 Tiger Microcar Is for Sale
Up Next

Elena Gorgan
Never judge a book by its cover, they say. Sometimes, you shouldn’t judge even if the book has been hidden from view for more than two decades after being involved in a serious head-on collision against a tree—like this once-gorgeous Jaguar.
14 photos

Not that it still needed to be said, but a car’s value is not always directly dependent on the car’s condition. As far as project cars go, or historically relevant pieces that have somehow escaped through the cracks and have suffered neglect, the real value is in these cars’ potential. Someone saw plenty of that with this 1960 Jaguar XK150 S Drophead Coupe.

We all love a good barn find story, and this is also one of those, at least partly so. This Jaguar, of which only 69 were produced in right-hand-drive during the entire series, spent the past two and a half decades in a barn, waiting for its owner to restore it. That same owner, its third until then, had crashed it on a rainy night in 1996, when he lost control on a country road and slammed head-on into a tree.

The owner survived with few injuries, and he took the mangled Jaguar into dry storage, thinking that, one day, he might bring it back to life. He never did do that, but the wreck got a new lease at life last weekend, when it was sold at auction by Bonhams. The hammer price was £90,000 ($127,500 at the current exchange rate), nine times the lowest estimate—and nearly double of what a concours-ready model fetched these days.

Bonhams said that the Jag “looks worse than it is,” but even so, the new owner will have his hands full with it. 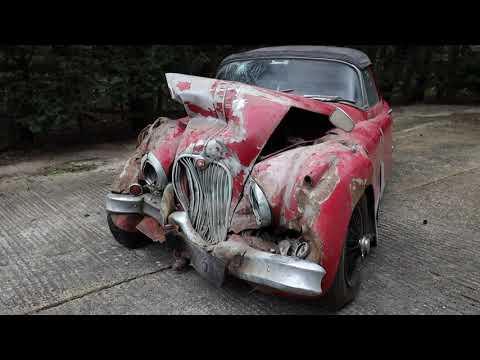